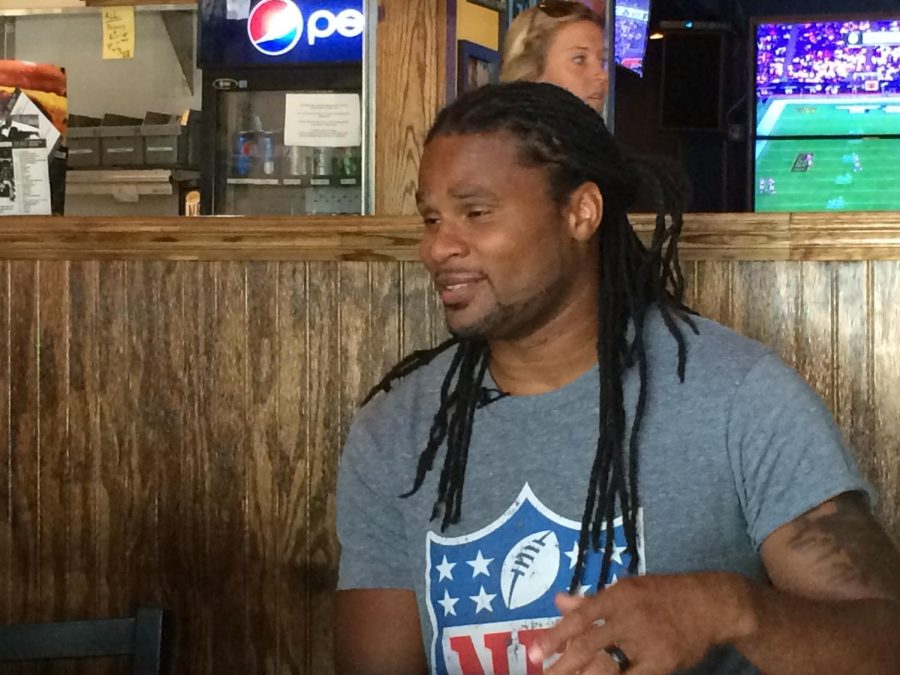 Former Kent State football standout Josh Cribbs returned to Kent this weekend to open the NFL season at Water Street Tavern and cheer on the Browns with the Kent Browns Backers, a non-profit organization made up of Browns fans who have donated more than $30,000 to local organizations since 2011.

Cribbs, the all-time record holder for kicks returned for touchdowns in NFL history, a three-time Pro Bowler, a Pro Football Hall of Fame All-2000’s Team selection and Kent State’s all-time leader in rushing touchdowns (39) and total offensive yards (10,839) sat down with The Kent Stater and TV2 to talk one thing: football.

Talk to us about why you’re back in the area. What brings you back to Water Street today?

Well, just getting my opportunity to start off right at the moment at Kent State because this is instrumental to me. I love being attached to the community, not just in Kent State terms, but in Browns terms. I’ve been able to raise my family here, I started my life (here,) my career all here at Kent State; it’s only fitting that you know, I come back and support the Browns Backers.

It’s almost a decade removed since your playing days (at Kent State.) How’s the reception been every time you’ve come back?

Oh, it’s tremendous. That’s why I love coming back here so much. It’s such a warm welcome. A lot of the fans here, they remember my games (at Kent State.) (They say,) ‘Remember when you ran against this team, or that team?’ It just brings back so many memories; it just gives me motivation right now…to get back into the NFL.

Speaking about your memories, what are some of your favorite memories from Kent State?

Some of my best memories are games against certain teams. Marshall was a good game; I ran for a long touchdown and made ESPN right here at Kent; against Akron in the Rubber Bowl, defeating Akron, beating Charlie Frye and seeing how his face is looking and bringing home the Wagon Wheel to Kent State — being able to satisfy the fans at Kent.

When you made that transition to the NFL, Charlie (Frye) was on that Browns team, right?

Yes, yes. He was on that Browns team — he took my number, my college numbers — so I was upset about that. You know, I never said I wanted to make it at quarterback in the NFL. My dream was just to make it to the NFL, and however possible I could do that, I did (it.) I just played as hard as I could.

Was it a difficult transition going from a quarterback in college to receiver and specialist in the NFL?

It was a difficult task, just not being able to practice that going in and having to perform at a high level against guys who are great at what they do, you know? Obviously being drafted into the NFL, I came in with Braylon Edwards and we already had a host of good, well-known wide receivers like Andre Davis. Having to compete with them was hard, but the transition became easy for me once I was able to move to special teams and make a name for myself based on pure effort and determination.

What else goes into kick returns? Everyone says it’s based on speed, but you’re the career record holder for touchdowns (off kick returns). What’s your secret?

It’s all about vision. You know, you have to know how the plays are being set up. You have to know what the responsibilities are on the opposing side. If you know where the other guys are supposed to be, it will help you out in your vision-making plays. I’m a north-south runner, you make one or two cuts and hit the hole — not a lot of dancing around — I was taught that early.

You came into the league a little bit before the mobile quarterback trend. Do you ever think about it and think, ‘Man, if I would have came in five years later, that would have been me?’

Yes, the mobile quarterback is a trend now running rampant throughout the NFL and college football. I definitely thought I was a little ahead of my time, but it all happened for a reason. Now I’m the record holder for kick returns. I definitely had a great career thus far. It’s coming to the tail end, but I definitely wouldn’t change it at all.

What’s next for you?

Well, I’m still trying to be an NFL player. I’m still trying to get back into the NFL. I did for the last two years, joining with the Jets and the Colts later on in the year. If I don’t play this year, I will retire. I’m doing a lot of play-by-play (as a sports analyst) for the MAC this year. So you’ll see me at a lot of MAC games this year. As well as for Channel 3 locally, downtown, on WTAM. So, I’m looking forward to a lot of things, and if I want to make an impact locally.

What’s your expectations for your alma mater this year?

I expect great things. I always expect great things from them. Big shout out to April (Goss.) Making that extra point, knocking down barriers. I’m excited for that, especially with her being a senior. Just the second girl to do that (score a point in FBS league play,) that’s tremendous. For the team this year, I want them to beat the teams they’re supposed to beat. They’re going to be facing some good football teams this year, even in the MAC, so when they’re supposed to win… go on and win those games. I just want them to be decent this year so I can have something to brag about.

Ian Flickinger is the sports editor for The Kent Stater. Contact him at [email protected]