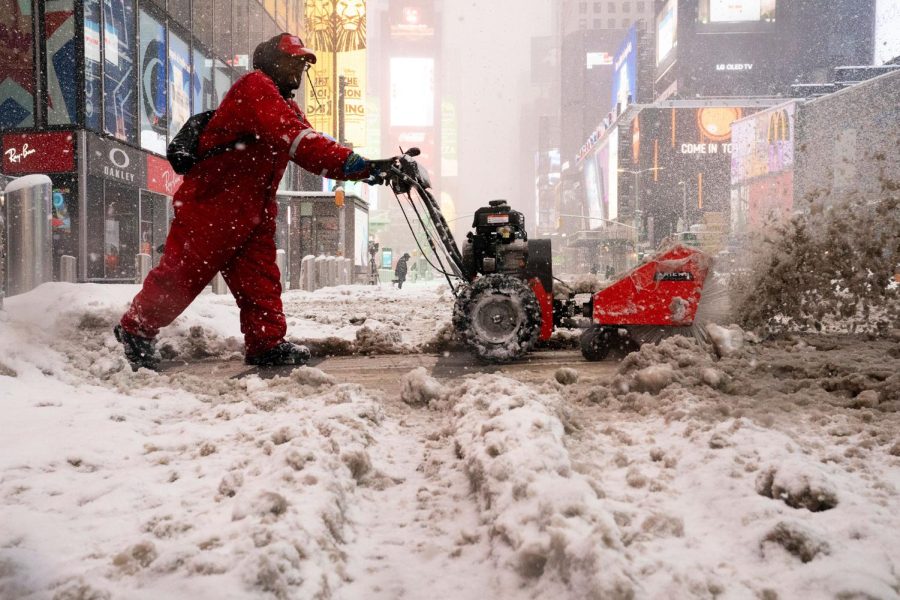 (CNN) — A fierce winter storm has been pounding the Northeast and mid-Atlantic states, blanketing some areas with feet of snow and shutting down Covid-19 vaccination sites as officials urged residents to prepare for more dangerous weather Tuesday.

Parts of eastern Pennsylvania and northern New Jersey have seen more than 2 feet of snow. The highest totals reported so far have been in the Pennsylvania communities of Nazareth and Ancient Oaks, with 31 inches, according to the National Weather Service.

And over a foot of snow has covered areas in Connecticut, Maryland, Massachusetts, New Hampshire, New Jersey, New York, Pennsylvania and Vermont.

New York City’s Central Park was covered by more than 17 inches of snow by early Tuesday — placing the storm in the top 20 snowstorms in the city’s recorded history.

“This winter storm is already producing large amounts of snow and creating dangerous travel conditions and it is expected to continue into tomorrow,” New York Gov. Andrew Cuomo said Monday.

On Tuesday, snowfall is expected to be heaviest across northern New England, where an additional 6-12 inches are expected. Lighter snow is expected across much of the Northeast.

But it’s not just the heavy snow and blizzard-like conditions worrying officials: Coastal flood alerts — including watches, warnings and advisories — from Maine to southern Delaware, are in effect for more than 16 million people.

The New York governor’s office warned Monday that neighborhoods along the coast could experience “multiple rounds of flooding, especially during high tides.”

Minor to moderate flooding was reported across the region’s coast early Tuesday, enough to flood out basements, roads and cause minor structural damage, according to CNN meteorologist Michael Guy. Water levels are currently about two to four feet above normal, Guy said.

“This type of flooding is extremely dangerous and can be deadly,” Guy added.

Meanwhile, vaccination sites across New York were closed Monday due to the storm and at least five state-run vaccine sites in the state will be closed Tuesday, the governor said.

“For the safety of both workers and individuals scheduled to receive a vaccination, we will be postponing appointments for tomorrow at several vaccination sites that are being impacted by this storm,” Cuomo said in a statement. “To be clear — no one is losing an appointment — they will all be rescheduled when conditions are safer.”

In New Jersey — still under a state of emergency — Gov. Phil Murphy announced state offices and the state’s six vaccine mega-sites will remain closed Tuesday as a result of weather conditions.

“Heavy snow, coastal flooding, and high winds are expected to continue across the state today into tomorrow,” Murphy said Monday. “I urge all of our residents to follow weather-related guidance and stay off the roads in order to allow access for essential workers and emergency personnel.”

In Pennsylvania, where Gov. Tom Wolf signed a disaster emergency proclamation in response to the storm, officials said Monday they were worried about how the conditions would affect vaccinations.

“Throughout the storm, (the Pennsylvania Emergency Management Agency) is working with our state and county partners to make sure we have a clear understanding of the storm and how it is affecting different parts of the state,” PEMA Director Randy Padfield said.

“We are particularly concerned with shipment and delivery of COVID-19 vaccines, so we appreciate citizens who are taking this storm seriously and staying off the roads because fewer vehicles means fewer incidents that could delay those operations,” Padfield added.

Dangerous travel conditions across the region

As the storm pummeled Connecticut on Monday, Stamford authorities announced they rescued two people from a pickup truck that was hit by high winds, snow and a strong tide that caused the vehicle to fill with water.

On Monday afternoon, firefighters found the truck partially submerged and floating 40 feet away from the shore, the Stamford Fire Department said. A female was standing on one side of the vehicle shouting that a male was trapped inside, the department said.

Firefighters swam to the vehicle and were able to get the female out with the help of an aerial ladder, while they worked to rescue the male as the truck quickly became entirely submerged by water,” the department said in its news release.

“One firefighter maintained a physical hold on the man’s arm and was able to pull him through the small window after the truck was completely under water,” the department said. “Once he was free, firefighters placed the man into the tower ladder and both occupants were brought to shore.”

The male was later transported to the hospital, authorities said.

In New Jersey, state police reported Monday night they had responded to more than 660 motor vehicle crashes and more than 1,000 motorist aids in about a day.

“Motorist aids can be anything from flat tires, mechanical breakdowns, spin outs, etc,” state police said. “We urge residents to remain off of the roads.”