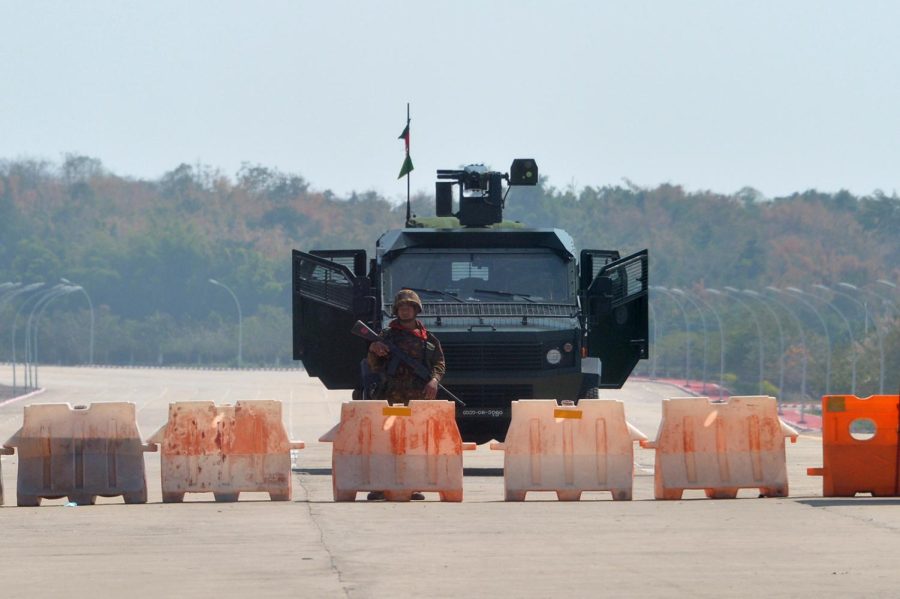 A soldier stands guard on a blockaded road to Myanmar's parliament in Naypyidaw on February 1, 2021, after the military detained the country's de facto leader Aung San Suu Kyi and the country's president in a coup. (Photo by STR / AFP) (Photo by STR/AFP via Getty Images)

(CNN) — Myanmar’s powerful military has taken control of the country in a coup and declared a state of emergency, following the detention of Aung San Suu Kyi and other senior government leaders in early morning raids Monday.

The country woke up to widespread internet and communications blackouts, closed banks, and soldiers in army fatigues patrolling the streets of Myanmar’s largest city, Yangon. Residents turning on their television sets could only access the military-owned Myawaddy TV channel, with all other news channels seemingly blocked.

As news filtered through that the country’s democratically-elected leaders had been detained in the capital, a news anchor announced on the military-owned channel that power had been handed over to army chief Min Aung Hlaing.

In the address, the military confirmed it had detained the country’s de facto civilian leader Suu Kyi, along with other high ranking National League for Democracy (NLD) leaders, in response to alleged voting irregularities in November’s election.

Later on Monday the military announced the removal of 24 ministers and deputies from the government. The military has named 11 replacements, who will assume their roles in a new administration. That announcement was also made through Myawaddy TV.

Suu Kyi’s party, the NLD claimed an overwhelming victory in that election, taking 83% of the vote, which granted it another five years in government. The military-backed Union Solidarity and Development Party won just 33 out of a possible 476 seats.

The coup came just hours before the first session of the new parliament was set to open, and follows weeks of worsening political tensions in the country over the disputed election amid rumors that the military could take over.

A statement purportedly from Suu Kyi was published on her party’s official Facebook account, calling for people to protest against the coup on Monday, though there were questions about the statement’s authenticity.

“The actions of the military are actions to put the country back under a dictatorship,” the statement said. “I urge people not to accept this, to respond and wholeheartedly to protest against the coup by the military.”

Suu Kyi has not been seen since she was detained early on Monday morning. The statement ends with her name but is not signed, and it was unclear how Suu Kyi would issue a statement while in detention.

Suu Kyi is being held at her official residence, according to her party’s official spokesperson.

“She’s feeling well — walking in the compound frequently,” Kyi Toe said Monday in a post on his personal Facebook page.

Monday’s events have been widely condemned internationally, with the United States calling on Myanmar’s military leaders to “release all government officials and civil society leaders and respect the will of the people.”

“The United States expresses grave concern and alarm regarding reports that the Burmese military has detained multiple civilian government leaders, including State Counsellor Aung San Suu Kyi, and civil society leaders,” according to a statement from the US Secretary of State Antony Blinken. “The military must reverse these actions immediately.”

Army chief Min Aung Hlaing, who is now running the country, has been under US sanctions since December 2019. He was designated for serious human rights abuses related to the atrocities committed against the Rohingya Muslim community.

On Monday, Min Aung Hlaing’s office released a statement saying that elections will take place only after the election commission has been “re-constituted” and the voter lists have been investigated.

“A free and fair multiparty general election will be held and then, state responsibilities will be handed over to the winning party meeting norms and standards of democracy,” the statement said.

“I have a sinking feeling that no one will really be able to control what comes next. And remember Myanmar’s a country awash in weapons, with deep divisions across ethnic and religious lines, where millions can barely feed themselves.”

What led to the coup

The November election was only the second democratic vote since the country emerged from 50 years of isolationist military rule in 2011.

The military has alleged that voter fraud took place during the poll, which delivered a far bigger majority for Suu Kyi’s party than many had anticipated, including those in the military.

Last week, a military spokesperson said it would not rule out a coup if the unfounded allegations of voter fraud were not properly investigated. On Monday it moved to act on that claim, reasserting its authority with the arrest of numerous political leaders for “failing to take action.”

Myanmar’s election commission had previously rejected the allegations made by the military, saying any errors, such as duplicated names on voter lists, were not enough to impact the result of the vote.

The sudden coup has surprised some observers, who point out that the military already wields significant power.

In 2008, the ruling junta drafted a constitution that allocated 25% of legislative seats to the military as well as control of key ministries such as defense and home affairs, and a veto power on constitutional issues.

United Nations Special Rapporteur on Human Rights for Myanmar, Tom Andrews, told CNN that the coup is a “real mystery.”

“They wrote the constitution that they just overthrew. It gives them enormous power, economic power, political power,” he said. “So how and why they overturn their own constitution is incredible.”

Andrews said their action is “extremely damaging” and comes at a time when many in the country are suffering extreme hardships because of the coronaviorus pandemic.

“The people of Myanmar have been through so much. They’ve lived through decades of brutal military rule. They are going through a pandemic. The economy is in tough shape for so many. It’s so incredibly unfair for them to have to go through this right now,” he said.

The arrest of Nobel laureate Suu Kyi marks a potentially volatile moment for the fledgling democracy.

Though her international reputation has been tarnished in recent years by allegations of genocide against the Rohingya, the former democracy icon remains enormously popular in Myanmar where she commands broad and loyal support, especially among the country’s majority Bamar ethnic group.

Suu Kyi spent 15 years under house arrest as part of a decades-long fight against military rule. Five years after her release, she led her party to a landslide victory in Myanmar’s 2015 elections, establishing its first civilian government after decades of isolation and military authoritarianism.

On Monday human rights non-government organization Burma Rights UK said in a post to their Twitter that the news of Suu Kyi’s detention was “devastating.”

“This needs to be met with the strongest international response. The military need to be made to understand that they have made a major miscalculation in thinking they can get away with this,” the group said.

Melissa Crouch, law professor at University of New South Wales, Australia and author of “The Constitution of Myanmar” said it was still unclear what the military’s end game is.

“This week was supposed to be the meeting of the new government, so the inauguration of the new government. Instead, all of the members of parliament, many of the chief ministers, have been arrested. We know that at the moment, that at least 30 people have been arrested, possibly more,” she said, adding that the whereabouts of Suu Kyi are unknown.

The former UN special rapporteur to Myanmar Yanghee Lee pointed to the fact that Min Aung Hlaing, who has a lot of foreign investments, is set to step down later this year. He is also being investigated by the International Criminal Court for crimes of genocide against the Rohingya.

“This dreadful event will definitely hamper the democratic process of Myanmar,” she said, adding that the international community “needs to cut all relations with Myanmar.”