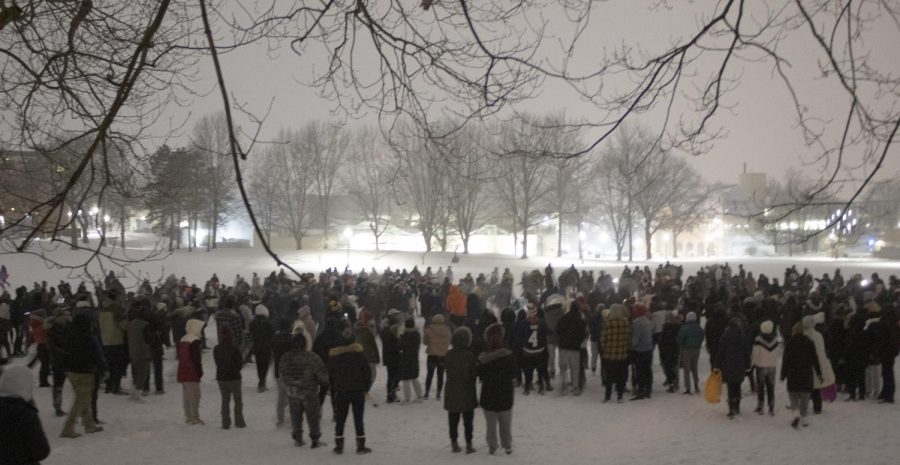 300 to 500 people gather at the hill behind Taylor Hall on Mon. Feb. 15 to engage in a snowball fight. Other items were thrown such as laundry baskets, Xbox controllers and potatoes.

Usually a snowstorm means stay inside, lift the windshield wipers on your car and stay safe. But for Kent State students, it meant a snowball fight.

The fight originated from a GroupMe with over 1,100 members. 300 to 500 participants ended up showing, with the fight taking place late Monday night on the hill behind Taylor Hall. The participants included students and non-students alike.

People started to gather on the hill around 10:30 p.m. and stayed until around 11:20 p.m. when police arrived at the scene and the crowd dispersed immediately.

Barstool Kent posted the snowball fight on Twitter and many students tried to get well-known people to show up by DMing them on Twitter, such as @SirYacht on Twitter, and Kent State graduate Shane Nagy.

Walking down the hill behind Taylor Hall, one could see a mass of people, until one person yelled out what resembled a battle cry and everyone took charge.

The snowball fight also came with participants throwing other items such as laundry baskets, Xbox controllers and potatoes. Students came from on and off campus and brought various items to sled with as well. While most of the participants were wearing masks, there were many people who did not wear one.

Many people showed up to the event under the influence of various substances. There were also numerous chants going around, body surfing, and a few non-violent fights.

In addition to the students gathered at the bottom of the hill, several groups were sledding, skiing and rolling down the hill. In the GroupMe, one student shared that a police officer began sledding with the group.

Students discussed regrouping for a second snowball fight Tuesday, although a time was not decided. Many people suggested heading to the bars after, with proposals to move the fight off campus.

As of 9 a.m. Tuesday morning, the GroupMe was deleted or disbanded, with several students noting that they no longer have access to the chat.

Kaitlyn Finchler is the photo editor. Contact her at [email protected]