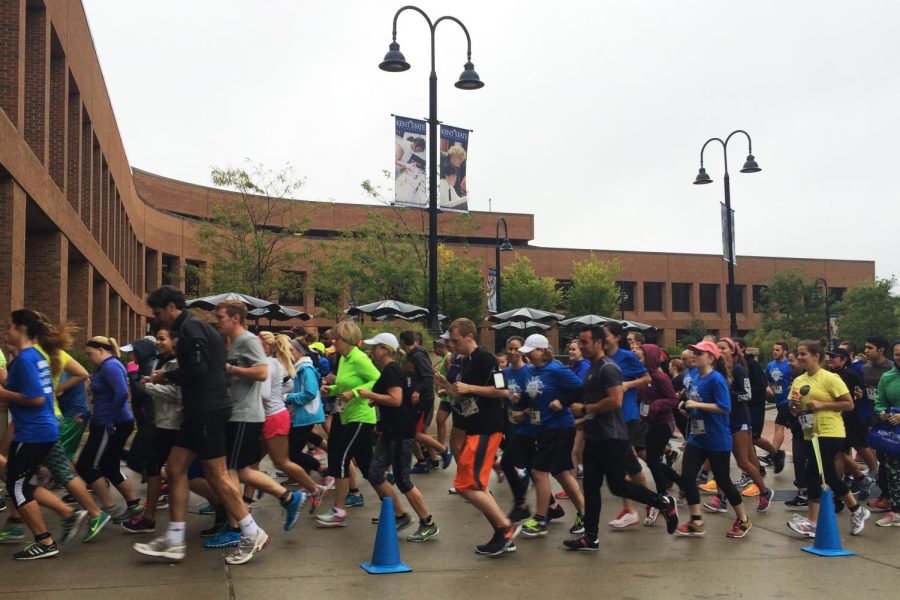 The race started in Risman Plaza. All participants received a T-shirt, finisher’s medal and food at the finish line.

The top three finishers in each age bracket were given a trophy, along with the male and female overall winners, Katie Pavlick and Daniel Bullard.

Race Director Ed Butch, said the 5K was a success even with it being a rainy day.

“The weather definitely kept a few away, but it ended up being a pretty nice day with good running weather,” Butch said. “It ended up working really well and I’m happy with it.”

The 8:30 a.m. race was pre- ceded by the national anthem, sung by Nicole Slaven, a junior history major, and a short speech from President Beverly Warren.

“This shows Kent State truly runs the world,” Warren said. “Our goal at Kent State is for every student to have that opportunity to study abroad. It is great to have such a global impact. We are Ohio’s international university.”

Butch said the turnout was more than he anticipated.

“My original expectation was about 150, but we ended up getting over 400 registered and we had about 300 who actually completed the race,” he said. “I’m hoping we can give away four or five scholarships we’ll announce later this week.”

The route was purposefully planned to begin and end on Risman Plaza.

Butch said he’d like to make the check-in process easier and smoother for runners in the future.

“I’d really like to get the course certified by USA Track & Field, because it could be a draw for runners in the running community and that could really increase our numbers,” he said.

The Office of Global Education, Roy’s Stow Travel, HMK Communications and Vertical Runner sponsored the event. Winners will be announced via the Run the World website, www.kent.edu/RunTheWorld and through Facebook.

Kaitlin Walker is the international beat reporter for The Kent Stater. Contact her at [email protected].