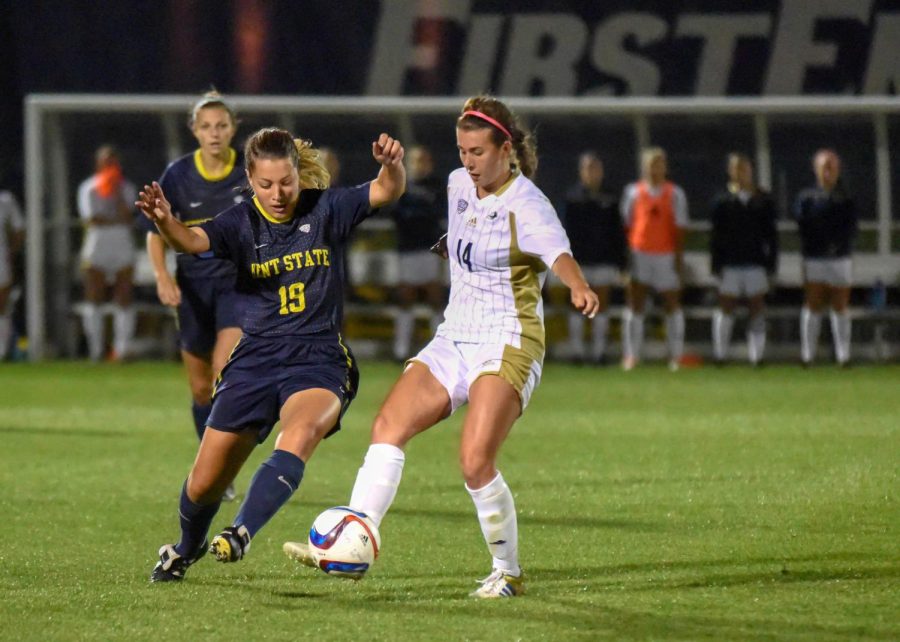 Briana Bartolone, senior, steals the ball away in the game against the Akron Zips at Cub Cadet Field on Friday, Sept. 25, 2015.

The Kent State women’s soccer team will head back home to face Western Michigan and Northern Illinois after spending the last couple of weeks on the road.

The Flashes recently went 2-1 on a road trip, brining its record away from home to 3-3. Kent State is undefeated at home this season with a 2-0-1 record.

Kent State head coach Rob Marinaro said, while it is not “relieving” to face a top team like Western Michigan at home, it is nice to be back playing at Zoeller Field.

“We like the comfort of being at home,” he said. “We’ll take the challenges of playing on the road, but there’s something about playing on your home field, being able to sleep in your own bed, and being able to manage your time schedule a little bit better.”

Even with the Flashes scheduled to face the only undefeated teams in MAC play (up to this point) for the next two weeks, Marinaro says there is consistently a sense of urgency going into conference games.

“We went into the weekend with Akron and Buffalo knowing they’re two strong MAC opponents,” he said. “It’s the same kind of mentality going into Western and Northern. As we talked about before, the MAC has such a strong parity. You’ve got to be up for absolutely every single game.”

At the very least, the Flashes’ defense has consistently performed well having not given up two goals in a game since they tied with Louisville in late August.

Freshman goalie Ashleah McDonald has been in the net for each of the last six games, as well as games against Bryant and Maryland due to the injuries of senior Stephanie Senn and sophomore Katie Kingsbury.

McDonald gave some stability to the position with a goals against average of .745 (fifty-seventh in the nation, third in the MAC) and a save percentage of 85.7 percent (tied for thirty-eighth, third).

McDonald credits her teammates for creating an environment that breeds confidence.

“I feel like the team’s really supported everyone here and really pumped everyone up,” she said. “I feel like it’s just the general energy throughout all of us.”

Last year Kent State shut out its opponents seven times. This year, the Flashes shut out two opponents, while giving up one goal to seven teams.

Sophomore defender Jaime Eiben says her team has the ability to shut out more teams this year.

“I feel like we’ve worked hard to connect better. We’re all on the same page,” Eiben said. “As long as we keep communicating I definitely think we have the capability to shut out every team.”

Leading the offensive side of the ball is junior forward Jenna Hellstrom, who has already matched her goal (seven) and assist (six) totals from last year in half the games.

Hellstrom, who played defense her freshman year, says having another year as a forward under her belt has helped a lot.

“I’m starting to get more of a forward mentality; how we’re going to fail more than we succeed,” she said. “We’re going to take more shots than we’re going to score obviously. Everything that coach has been saying I’ve been trying to do in practice then translate into games. With the help of my team, if they weren’t the ones giving me the ball, I wouldn’t have these opportunities.”

The Flashes had plenty of opportunities recently and finishing on those opportunities is something Marinaro said the team is looking to enhance.

“We continue to focus in on the offensive side of the ball,” he said. “We try to polish every aspect of the game from the defense to creating opportunities to finishing opportunities. There are many ways of doing that. We’ve hit on all those aspects throughout the week.”

Kent State plays Western Michigan at 4 p.m. on Friday at Zoeller Field. The Flashes will then host Northern Illinois at 1 p.m. on Sunday.