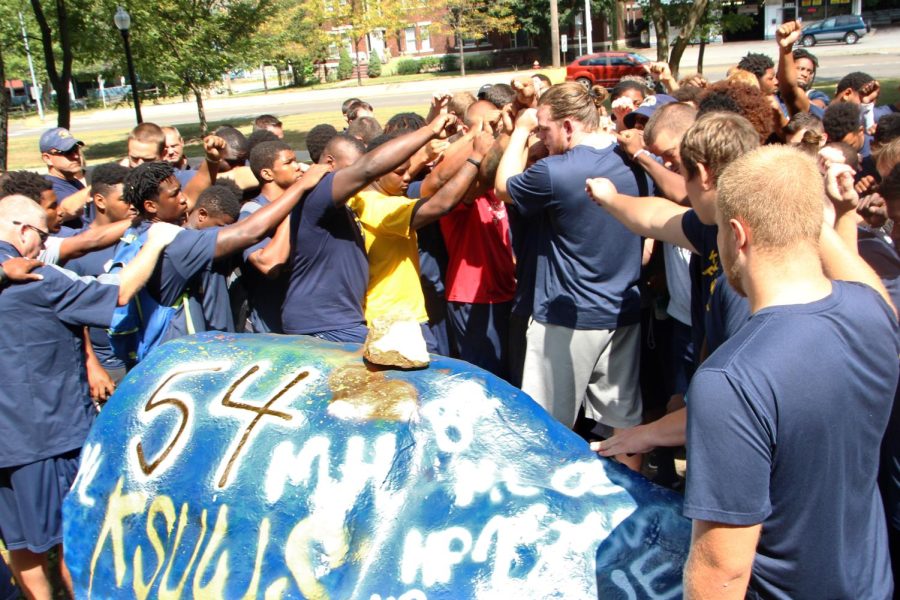 The Kent State football team does a team huddle and chant around the rock, which has Jason Bitsko’s football number 54 on it, on August 20, 2015. Kent State University is bringing back his number for the season. Junior left tackle Reno Reda will now be wearing his number.

Football is a game of numbers: completions thrown, yards gained, points scored. The list goes on and on. For the Kent State football team, the number 54 goes beyond the twill of the jersey.

Jason Bitsko, Kent State’s right tackle –turned- center, passed away Aug. 20, 2014  from an enlarged heart, leaving a 297-pound void on the field, but more importantly within the lives of friends, family, coaches, teammates and the Kent community. The would-be junior served on the team’s 15 member Leadership Council; coaches voted him winner of the Read Award, “given each spring to the player who exemplifies hard work and dedication beyond the call of duty.” Phil Steele of College Football Preview voted him 3rd Team All-MAC.

As the Kent community mourned, the team dedicated its season to Bitsko, wearing decals with his number 54 on their helmets throughout the 2014 season. But the jersey remained untouched— the hurt too deep, the wound too new – for any player to don his number.

After removing the helmet decals at the end of last season, the team missed representing their lost teammate and made a decision. This season #54 will return to the field for the Golden Flashes, aiming not to replace,but to honor Jason Bitsko.

The chosen player needed to be a lineman who possesses the traits Bitsko exemplified, “…the same pride, passion and devotion that Jason Bitsko displayed throughout his life. The bearer of the jersey would hold himself to highest standards and take responsibility for the growth and continuity of teammates,” reads the athletic departments press release.

“I was extremely honored and excited,” Reda said. “I’m still at a loss for words because this is one of the best honors I’ve ever received. I have so much gratitude for my coaches and teammates for choosing me. When I stood in front of the team, Coach Clark started to get emotional. I somehow kept my cool until after I was able to speak to the team.”

The jersey will be worn annually by an offensive lineman, with the player being honored in the meeting room for the offensive line.

The Golden Flashes look toward the Sept. 9 season opener on the road against Illinois, start time 9 p.m.