To rush or not to rush: Kent State Greek Life 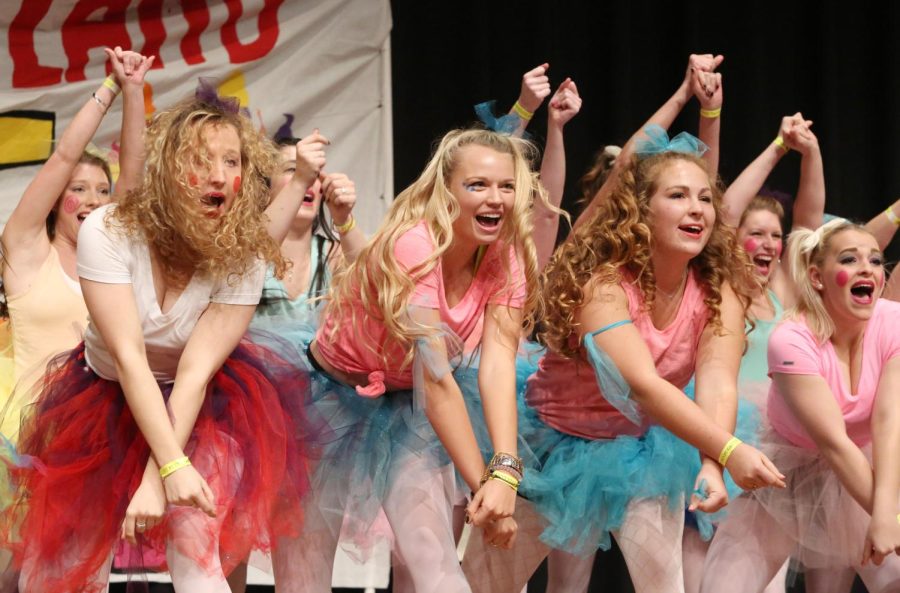 Members of Delta Zeta, Kappa Sigma and Phi Kappa Tau dance in a Candyland-themed number at Songfest in the Student Center Ballroom on Nov. 15, 2014.

Greek life is often one of the first things people think of when they think of college, but deciding whether or not to become a part of a fraternity or a sorority can be a difficult decision with several factors to consider.

The number of students joining Greek life has skyrocketed over the last few years. In 2012, only 400 students went through the sorority recruitment process. The last two years have seen at least 700 students each year go through the process.

This past year, 1,916 students were involved in Greek life, assistant director of greek affairs Meredith Bielaska said she anticipates this year’s number will be over 2,000, with about 700 students going through the sorority recruitment process.

The recruitment process, which begins on Tuesday, Sept. 15, is made up of several rounds, including the first round, when students can meet the different chapters and talk to the 80 sorority recruitment counselors, who are students who have disassociated from their chapters to discuss Greek life with potential new members.

After meeting the chapters, students rank their preferred chapters. Round two includes a tour of the chapter houses, and the preference round includes a formal tea, where chapters’ values and rituals are discussed.

The final part of the recruitment process is Bid Day, when new members are invited to join the chapters.

“You find your home away from home,” she said. “You’ll never have to worry about not having something to do or someone to do it with. I love knowing that I don’t have to worry about eating alone or sitting in class alone because usually a sister is right there with you.”

She said students do not have to end up becoming new members to make new friends.

“Even if you don’t even join a sorority or fraternity, just going through the recruitment process will help you find a ton of friends,” she said.

The only rule for fraternity recruitment is chapters cannot give bids until the third week of school, so this year, bids will not be sent out until after Sept. 18, Bielaska said. Members are also required to have a 2.7 GPA.

The chapters host many different recruitment events, including IFC (Interfraternity Council) Takes Over Tri-Towers, which is Saturday from 1 to 3 p.m. during Welcome Weekend.

The culturally based organizations can have a delayed membership process; some do not take freshmen, while others require a number of service hours before applying to join. Students who are interested in these chapters should contact them directly to find out the application process, Bielaska said.

Bielaska said students should look into several different chapters and find which one fits them best.

“This is membership for life,” she said. “Explore what’s out there; it’s like trying on clothes.”

About 60 to 65 percent of women who go through the recruitment process end up becoming active members. It has to be a mutual match between the chapter and the new member, Bielaska said.

Bielaska said the number also might seem low because many students who receive a bid don’t complete the new member process for a variety of reasons, including cost and time.

The new member classes are typically between 70 and 75 students.

For fraternities, Bielaska estimated the acceptance rate is somewhere between 70 to 80 percent.

One of the biggest factors to weigh in deciding whether or not to join Greek life is cost. Financial aid and loans cannot be applied to joining Greek life, and the university does not provide funding for Greek life. For this reason, much of the chapters’ funding comes from member dues, which can be steep for a new college student who has already spent a lot on tuition, textbooks and dorm decorations.

However, Bielaska said students should not let the high costs scare them away.

Between meetings, events and volunteer work, Greek life requires a large amount of a student’s time.

Students have to take part in new member meetings every week, which can last a few hours, and attend the chapter’s events throughout the semester, including working on its philanthropy, events to raise money for its national cause.

Many students think Greek life is a nonstop party, but Bielaska said that is not the case.

She said the chapters are values-based, and while they are social, the values are more important than the social aspect.

“We live those values every day,” she said. “The social aspect is a benefit, not a value. You do the work in order to get to play. These are not just drinking clubs. They’re socially-based organizations around values.”

The goal of becoming a member is to learn about the chapter and what it stands for and work to make it a better organization.

Those who don’t work to improve the chapter as a whole are often looked down on, Bielaska said.

“They’re losing out on the best piece of the organization,” she said. “The rest of the people in the organization really do kind of resent them because they’re not pulling their weight.”

In addition, Kent State has a zero-tolerance policy on hazing, and an investigation will take place if there are any reports of hazing, which can result in a hearing and disciplinary action.

Bielaska said overall, joining a fraternity or sorority can help the campus feel more manageable, help students make friends and give students a sense of purpose they might have lost in the transition from high school to college.