How to deal with roommate conflicts 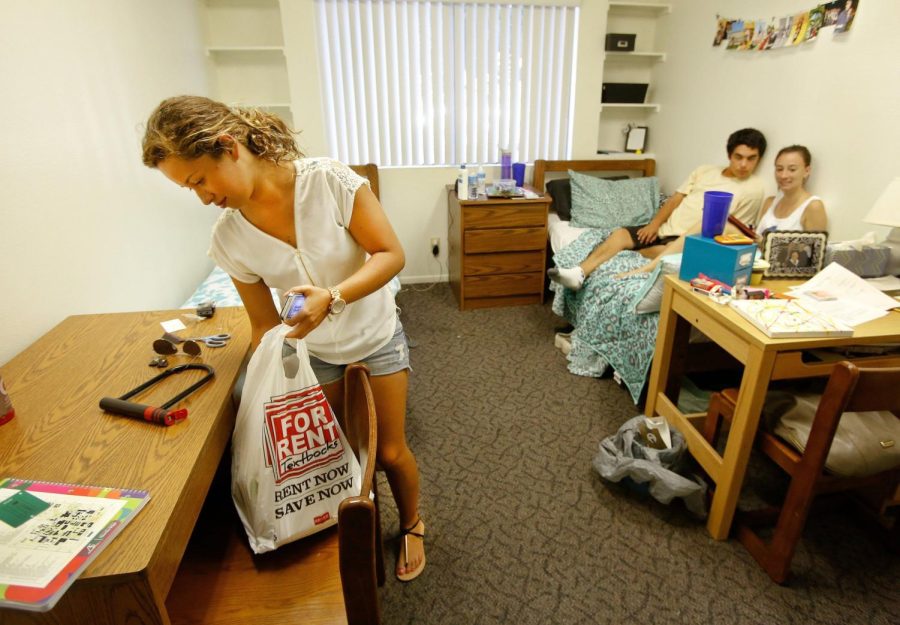 Carolina Saguero, 18, left, of South Los Angeles, a freshman at Cal State Northridge, is photographed inside her dorm room that she shares with Marlissa Frey, 18, right, of Santa Clarita, also a freshman, on August 26, 2013. Next to Frey is her friend Ricky Escalante, 18, who was visiting.

For all incoming freshmen and returning students living in the residence halls, learning how to get along and resolve conflicts with roommates is an important part of the college dorm experience.

Freshmen and sophomores are required to live on campus unless they have attempted 60 credit hours, are 20 years old, have lived in university housing for four semesters or live with their parent or guardian within 50 miles of the university.

Because a majority of the freshman class does live on campus, Church said it helps students create their identity as part of the class.

Living with other people has the potential to create problems, whether it’s because a student has never shared a room or simply trying to live with a relative stranger, said Jacquelyn Bleak, program manager for Student Mediation Services.

“For many people, it’s their first time living with someone other than their family,” Bleak said. “As we’re all aware, we have different dynamics with our family, different patterns that we find ourselves in. When we’re suddenly faced with a situation in which we have to break those patterns, or try something new and different, it can be challenging.”

When students move in, they are given the opportunity to sit down with their roommates and their resident assistants to talk over key items including cleaning, sharing and visitors and create a roommate agreement.

Church said it is best to be honest with roommates to prevent future conflicts.

“I think my biggest advice would be to acknowledge that it’s never always going to be perfect,” she said. “So expect there to be things to navigate. One way to navigate those well is to really take the roommate agreement seriously when they first move in. Being honest about how you like to receive information is helpful too.”

However, conflict is almost inevitable when living with another person.

Brianna Libby, a sophomore nursing major, had an issue with her roommate about when they could have visitors over.

Libby said it made her unable to study, but they were able to communicate and resolve their issue to prevent future arguments.

“I would just leave,” she said. “We compromised. We knew how to work it out.”

When conflict does arise, it is best to do what Libby did and communicate face-to-face about it, Bleak said.

Trying to communicate via text message or social media removes non-verbal communication from the situation, and things can quickly be taken out of context, creating even more issues.

“When you’re texting and you’re upset, it’s really difficult to be able to process a problem effectively,” she said. “So if you’re communicating via Instagram or texting, you’re missing a lot of opportunity to really hear what the other person is saying.”

Bleak said it is always better to talk to roommates about issues rather than keeping things inside or becoming passive-aggressive.

“A lot of times, folks, will avoid, avoid, avoid, because they’re uncomfortable processing conflict, and then it becomes too much and then they explode, and then there’s a roommate change,” she said. “It could have all been avoided, if they would have just talked in the first place.”

If a conflict becomes too large, RAs are there to help resolve the situation.

“If somebody feels themselves getting upset to the point that they’re not able to be civil, or they’re just not sure what words to use or how to approach somebody,” Church said, “that’s where you want to pull somebody in and at least brainstorm some ideas of how to approach (the roommate).”

Maria Espenschied, a junior fine arts major, said she had the help of an RA with her roommate conflict during her sophomore year.

She said she and her two roommates had a problem with timing. Some of them would stay up and come in late, while others would wake up early.

They got an RA involved to help meditate the situation. Espenschied said she was skeptical about the RA helping, but she was proven wrong.

“She (the RA) listened to both sides of our stories and she helped us work out a plan,” Espenschied said. “It took a little bit of getting used to, but we eventually got into the rhythm of things, and we ended up working it out so that we could stay friends.”

After her experience, Espenschied said she recommends roommates set guidelines at the beginning of the year to prevent any future arguments.

“It may seem weird…but you’re going to want them,” she said.

Most students will experience some sort of conflict with their roommates, but it’s important to talk about the issue and overcome it, Bleak said.

“Experiencing conflict is a part of life,” she said. “Where there are human beings, there will be conflicts and challenges. So if you’re willing to sit down face-to-face and talk about that, you’re going to be much more likely able to solve it and then hopefully preserve the relationship as well.”

Students who are seeking help with roommate issues can call Student Mediation Services at (330) 672-0355.