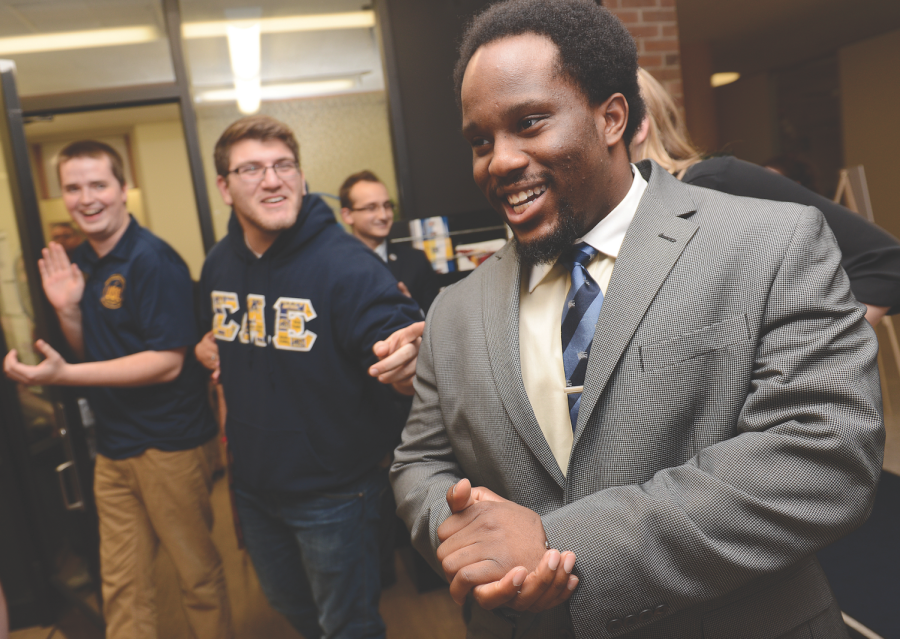 Senior entrepreneurship major Kevin Otubu reacts as he becomes the director of programming for Undergraduate Student Government as results of the elections are streamed in the Student Center on Tuesday, March 10, 2015.

Kent State’s Undergraduate Student Government is students’ representation in the administration at Kent State, but many students don’t understand what USG actually does.

“Undergraduate Student Government advocates and acts as a voice for the student body,” said Executive Director Brian Cannon. “We are here to serve and help make the student experience better at Kent State University with the services that we provide.”

USG, which was created in 1924, is made up of 25 representatives who are elected in the spring semester to serve one-year terms; there is one executive director, eight directors covering varying aspects of student life and 16 senators representing the colleges, commuters, residence halls and exploratory majors. These representatives are elected by members of the Kent State student body each March.

The senators of off-campus and commuter housing, University College and residence halls and the three senators-at-large are appointed by old and new USG members through interviews, said Kevin Otubu, vice chairman and director of programming.

“USG is the voice for our undergraduate students,” Otubu said. “We are the governing body that works in close liaison between the university, and the city for our students.”

USG provides allocations, or funding, for students and student organizations to host programs or events and attend conferences. In turn, USG receives its funding from students’ general activity fees.

USG is probably most well-known for the events it hosts throughout the year, including Blastoff, Flashfest, Study-A-Thons during finals weeks, Safety Week before spring break, concerts and comedy shows.

Students are able to submit suggestions for which acts they would like to see perform on campus.

“We make concerts affordable and reachable by (bringing) high-profile artists (to campus),” Otubu said. “Fill out who you’d like to come perform at Kent on the Kent State USG website so my team and I can see what the students would like and try our best to bring them.”

Students who are interested in getting involved with USG can join its street team, which helps pass out fliers before events and spreads information about USG,

“It’s a fun and interactive way to meet and talk to other people,” Otubu said.

Students can also come to USG’s public meetings, and they can apply to join the allocations and programming board at the end of the academic year.

“Never think it is too early to get involved or ask questions,” said Katie McKee, USG’s director of communications. “We are here to help you have the best four years as a Kent State undergraduate student.”

USG will be at BlastOff on Sunday from 6:30 p.m. to 8:30 p.m., where they will have performers and giving away prizes, including iPads and Beats headphones, Otubu said.