HacKSU teaches students to code outside the classroom 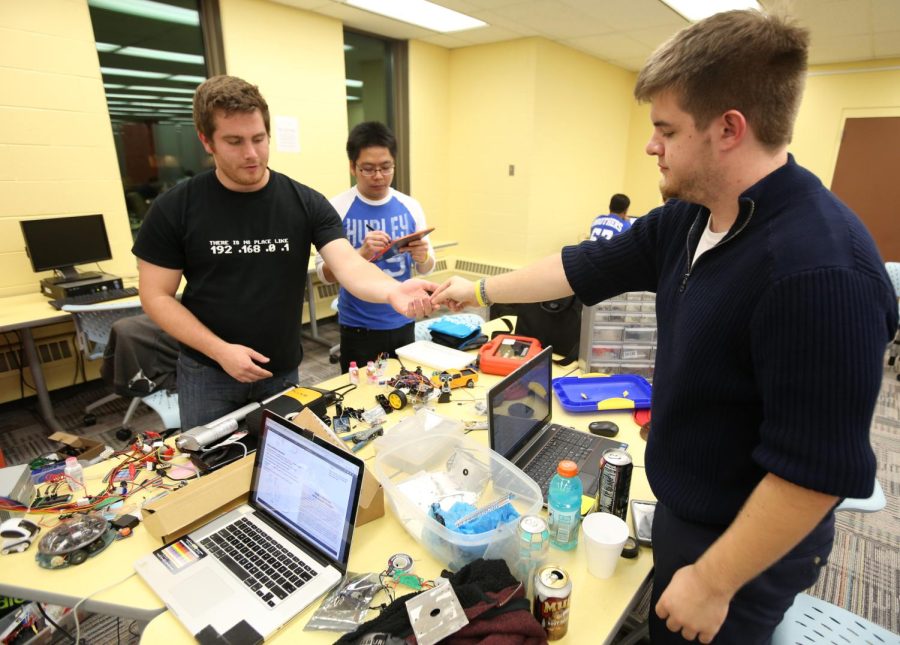 The Kent State Robotics Team works on its robot for Kent Hack Enough, a two-day long event hosted by HacKSU on the fourth floor in the University Library on Oct. 24, 2014.

There’s a group of computer hackers that meet each week on campus. Unlike the stereotypical malicious hackers found in movies, these are students learning from each other.

Want to learn how to make an app? What about learning how to write Python or HTML coding? Need help creating a website or giving your personal blog an update?

“HacKSU teaches students from all over campus how to be creative with technology,” said Robin Bonatesta, a senior double major in computer science and fashion merchandising, “Things you wouldn’t necessarily learn in classes.”

At the beginning of each academic year, roughly 75 students show up for the Tuesday meetings at 7 p.m. By the end of semester, roughly half still show up. But that’s fine with Bonatesta. She said she usually works with the beginners while her co-president Paul Dilyard, a senior digital science major, works with the more advanced students. Students can bring his or her own laptop or desktop computer to meetings, or use equipment provided.

HacKSU isn’t just about learning, either. The group travels to neighboring states to compete against other schools, including well-established computer science programs like the University of Pennsylvania and Michigan State. Each year the groups participates in up to eight different hackathons.

“There aren’t many schools doing computer related clubs well,” Bonatesta said. “Other schools are looking to use (HacKSU) as a model for how to make it work.”

The groups also partners with Major League Hacking to host its own hackathon, Kent Hack Enough. Bonatesta said they usually make it a party-like theme, with water pong and an open bar where Red Bull is served. Meetings are typically held in the Honors College, but Bonatesta said they are currently looking for a new location in order to accommodate more people.