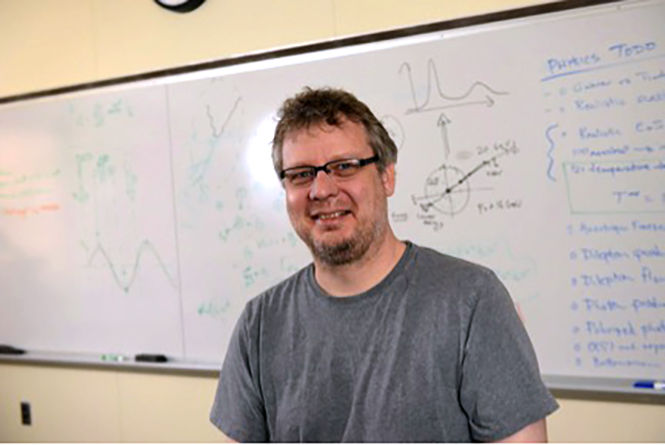 Kent State physics researcher Michael Strickland received a two-year $307,000 grant from the U.S. Department of Energy to study a hypothetical state of matter believed to have been present milliseconds after the Big Bang.

According to livescience.com, the matter, known as quark-gluon plasma, was believed to have been at “temperatures between 7 trillion and 10 trillion degrees Fahrenheit (4 trillion and 6 trillion degrees Celsius)”, and is the “hottest thing ever created on Earth — about 100,000 times hotter than the center of the sun.”

Strickland said the idea for this research came about during heated discussion with former graduate student Mauricio Martinez about early-times dynamics in the quark-gluon plasma generated at CERN’s Large Hadron Collider.

“During the summer of 2010, in a manner of two to three weeks, we came up with the idea and wrote the first paper,” Strickland said. “In this first paper, we demonstrated that the method was superior to all known methods for simulating the dynamics of the QGP.”

Martinez is now a postdoctoral researcher at Ohio State University, where he is working in parallel with physics professor Ulrich Heinz to help turn their method into a practical tool for use by other researchers in the field.

Strickland said the goal is to create a new framework to describe fluids that are far from equilibrium.

“Five years ago, this would have been considered an impossible task, but we have demonstrated that it works wonderfully in all cases where we can test it against exact solutions to the non-equilibrium dynamics,” Strickland said. “Our primary task is come up with a tool that can be used to more reliably analyze data coming from the LHC’s heavy ion collision experiments.”

“At the LHC and RHIC, measurements are made which we call observables,” Krouppa said. “The test of a theoretical model is to extract that same information and then compare. If the model matches the data, it’s a good model.”

Krouppa said the QGP helps us understand the early universe, as the entire universe was made up of this kind of matter.

Strickland is the sole investigator on the grant, but he will work with a larger international team, including three graduate students, two postdoctoral researchers and collaborators from the United States, Germany, Italy, Poland, India, Iran, Norway, Saudi Arabia and Brazil.

“Needless to say we are excited that laboratory experiments can help us to learn information about this primordial state of matter,” he said.