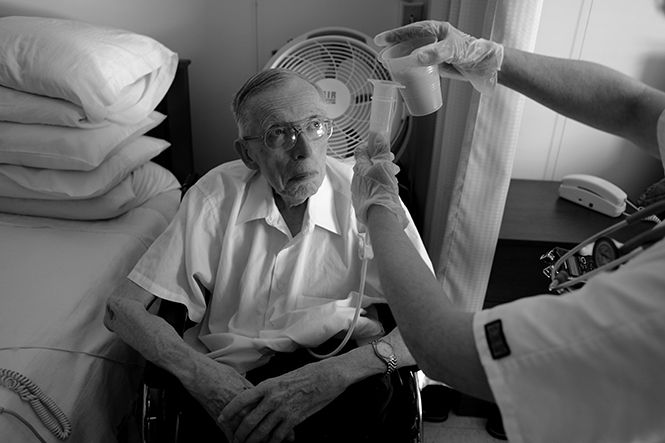 Bob gets his nutrition through enteral feeding through a stomach tube, which allows the food to enter directly through his gastrointestinal tract. “If I could do this myself, and was able to standup, I wouldn’t be here, I’d be home,” said West. On February 28 of this year, Bob and Traci were told he would need to remain at the facility due to tube feeding.

For nearly four decades, Bob West shared a lifetime of knowledge in film and broadcast with Kent State students.

West, a former Kent State professor at the School of Journalism and Mass Communication died Saturday of pneumonia due to complications of Parkinson’s disease.

Traci West was married to Bob for nearly 18 years. They shared a love of film, culture, religion and more throughout the years.

“We could talk about anything and everything,” she said. “In the early years of our marriage, we could hardly go anywhere without him being recognized by someone. Students would always come up to him and tell him that he was the best professor who taught them things that their major didn’t.”

“The hardest thing for him to bear when he got sicker was that he could not teach anymore. Teaching was his calling,” Traci said.

Bob graduated from Kent State in 1950 with a Bachelor’s in broadcast journalism. He went on to spend most of his career in radio in the Cleveland-Akron area, where he showcased music from the 1950s and 60s. He returned to teach at Kent State in 1976.

“He was a teacher’s teacher,” retired JMC professor Ben Whaley said. “Summing up Bob West in short is hard. The man was a warrior from WWII, a poet, playwright, minister, radio personality, bookstore owner, filmmaker, husband and professor.”

West was extremely patient, dedicated and lived to educate others.

The School of JMC Director Thor Wasbotten worked with West toward the end West’s career at Kent State.

“Bob was a tremendous asset and representative of Kent State University,” Wasbotten said. “Anytime you can have an impact on students and a university for over four decades, something has gone right.”

“Faculty lovingly nicknamed him ‘Jurassic Bob’ because he had knowledge of a century in film,” retired professor Barb Hipsman-Springer said. “He respected and raised students’ intelligence and always had his door open to talk.”

Along with his wife, Bob West is survived by his three children.

The School of JMC will host a memorial service celebrating Bob West on July 18 at 11 a.m. in 213 Franklin Hall. Hipsman-Springer will coordinate the service, and Whaley and senior lecturer Traci Williams will deliver the eulogy.