Q&A with Jerry Lewis, May 4 historian 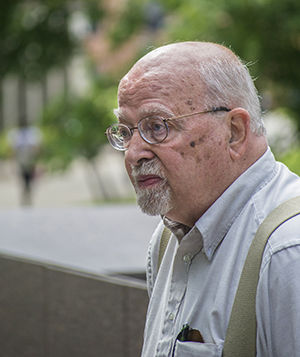 Jerry M. Lewis, Kent Stater Professor Emeritus of Sociology, gives a tour of the May 4 walk on Sept. 15, 2014. Lewis was a professor on campus during the shooting on May 4, 1970.

Jerry M. Lewis, a professor emeritus in Kent State’s sociology department, has been studying May 4 and its effects since the events unfolded before him 45 years ago. He’s written numerous articles on the subject and is one of the founding members of the annual May 4 Vigil and March.

Here Lewis discusses his studies, the May 4 Visitors Center and where he was when the National Guard opened fire.

Q: What kind of work have you done in regards to May 4?

A: Well I’ve written mostly articles on the events from a sociological perspective, especially in regards to freedom of speech. However, one of my major papers was about the famous picture of Mary Vecchio crying over Jeffrey Miller’s body. It’s all very dramatic. Her hands completely capture the tragedy of what’s happened in front of her. It’s how eighth graders and high schoolers get perspective as to what happened that day.

Q: What has been the biggest event to happen in conjunction with the May 4 commemoration since the first anniversary?

A: I think the Visitors Center is a very important moment as well as the dedication of the memorial in 1990 and the addition of the markings of where the four students were shot. They’re just such an important teaching device. When I would take people on tour, they didn’t believe the distances people were from the Guard, and now they’re a permanent vigil to the students and the loss of freedom of speech. All of these have helped to create this area as a sacred space.

Q: Why is it important to you that the May 4 Visitors Center exists?

A: On the memorial, it says “inquire,” “learn” and “reflect” and I think that’s what the center’s about. Students come in and inquire, and they learn about the various galleries and then reflect on the events. And not just the students who died but also on the issue of freedom of speech. I think that (the) National Guard took away freedom of speech that day. It was on a college campus, and they were agents of the State of Ohio who took freedom of speech away. And I think that’s essential to a healthy democracy so the Visitors Center is designed to help people visit the physical site of the shooting.

Q: Who often visits the center?

A: There’s been a range of people who come in and, since I’m a sociologist, I like to put them into categories. We’ve had high schools students, FYE students — a lot of those First-Year Experience students — we have a lot of alums [sic] come back. I think if I’ve had any role, it’s talking with alums, not just of that generation but alums who were here and remember the Kent State stories going on for many years, and students who are experiencing aspects right now — the 45th anniversary. Townspeople come. The biggest constituency are the First-Year Experience students. I had one student come in, a young woman, who came up and thanked us for the Visitors Center because she thought the students shot the National Guard. That’s an extreme thing, but it’s a whole category of people. What we don’t have is the general population normally coming in. It appears to me that the people who come through have a clear historical or sociological reason for coming. It’s clearly demographic categories that come in.

Q: Some people new to the area don’t understand the significance of May 4. What would you say to those people?

A: They should learn about it because it is a part of Kent State, and I would argue any employer would want to know what you know about the events if it were to come up in a job interview. So even from a pragmatic level like that it’s important. It’s important to understand your culture. We tend to be ahistorical in our society. Any college has a history and every student should learn about that, whether it’s famous professors or tragedies or mascots or sports teams. And I think that when you join an institution, you should learn its history. I think beyond honoring the four dead, nine wounded and the loss of freedom of speech, people should be learning about the institution. It’s why the five-year anniversaries are important.

Q: How does May 4 affect our identity as a university?

A: When people hear Kent State, they think May 4 because it’s such a salient issue. The Mary Vecchio picture is everywhere. That and “Ohio” by Crosby, Stills, Nash & Young.  So what I’ve always said is that Kent State belongs to the society, and this is representative by journalism. Every major anniversary — for the 5s and 0s I call them — and it used to bother me because people would just talk about the shootings but not about the people who were killed and the nine wounded, and I think we need to focus on that and the symbolic things as well. More and more I’ve realized that we need to remember May 4, and I’m glad we’re in the public eye because of freedom of speech. It’s essential to democracy. I’m not worried at all about being Kent State May 4. I gave a paper in England on violence, and when the Q&A section started, they started asking me about May 4. And this was in England. When people talk about May 4 and the shootings, it gets transferred into everyday.

Q: Is the reverence the university has for May 4 recent?

A: I think it’s changed. It was much more political before. It was respectful people who knew the four people and who knew the nine wounded and often some of the wounded like Dean Kahler and Alan Canfora were there, the parents were there but it was much more political. Now it’s very sacred and we’re recognizing it as sacred space, as is society, because the whole space has been placed on the National Register of Historic Places and it’s sacred for the history of America. That was such an important moment because it happened after 40 years, and we didn’t think it would happen until the 50th anniversary.

A: There’s Sandy Scheuer’s spot — that’s the furthest spot away with the lights that come on at night — I was 15 yards behind her so when the National Guard got up on the hill and turned right to fire, I saw the smoke coming out of the weapons and I had been in the Army and I knew they were real bullets so I dove for cover.

Q: What was going through your mind when that happened?

A: I thought they were shooting at me. I was a faculty marshal and I had gone through the Prentice Hall parking lot to the students in the field where the Centennials are now, and there was a blind student laying there and I gave him first aid. He had been tear-gassed and I told his friend what to do and started heading back towards the Taylor Hall parking lot. And when I got to the edge of the parking lot, they were going up on the hill and turned and fired.

Q: How did the students react after the shooting? Was Vecchio’s reaction common?

A: The reactions of the students after the shootings were very meaningful. A lot of them began performing first aid. Dean Kahler was actually worried about the amount of first aid he was receiving because he was afraid of being turned over when he knew he had a serious back injury. When  (former Kent State professor) Glenn Frank spoke to students, they listened and he convinced them to leave the Commons. You would expect them to be enraged, but it was solemn. I’ve always thought the students recognized the depth of the tragedy immediately.