Military members reflect on experience, significance of May 4 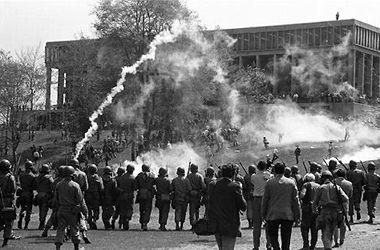 Captain J. Ronald Snyder of the 145th Infantry, Company C of the Ohio National Guard, started toward Kent on the Akron Expressway after being called in due to riots downtown. He vividly remembers the sky that day: bright red. The year was 1970.

“We could tell that something serious was going on,” Snyder said in a 2007 interview with the Oral History Project. “It was kind of like something that you would see when they showed pictures of Baghdad after the bombing, although there was no noise, you understand. It was just a bright red glow. Embers.”

It was Saturday night, May 2, and riots were swelling across the country as U.S. citizens became enraged over Nixon’s decision to invade Cambodia.

“Out of all the buildings on campus the students could have attacked, the important thing is the symbolic aspect of the ROTC building because it represented the military,” said Jerry M. Lewis, who was a faculty marshal in 1970 and is currently professor emeritus of sociology.

Lewis stood 30 yards from the burning building as he tried to get students to leave the scene. He said he feared if there was any ammunition in the building, it could explode during the fire.

“There was a lot of tension. One is just the sheer number of guardsmen that were there,” Lewis said.  “Just the simple physical presence of the Guard and the bayonets. People were trying to carry on their normal academic functions, but the Guard were every place.”

Tensions arose on campus between the Vietnam protestors and the National Guard as the Guard’s presence became more prevalent in Kent. Students, including Alan Canfora, who was shot in the right wrist on May 4, were angry about the expansion of the war after Nixon previously promised America he had a secret plan to end the war.

“We were just very surprised to see this armed force come rolling into Kent in trucks and jeeps and armored vehicles,” Canfora said.

Canfora and his roommates were some of the most active protesters on campus. He carried a black flag on May 4 as he protested.

Canfora and his friends had recently attended the funeral of his roommate’s brother, who died in action in Vietnam six days before Nixon’s speech on April 30 when he announced the invasion.

“(The funeral) was very vivid in our minds then six days later Nixon invaded Cambodia,” he said. “That was really the prime motivation to protest more vigorously than we had before.”

The National Guard members were split up and stationed around the campus and city at various points including major intersections.

Lt. Col. Matthew Fox said some of the National Guard members were probably scared as they followed the orders given by their commanding officers.

“These 19-year-old young men, some of them were probably in fear for their lives,” Fox said. “The intangible is that 45 years later you never know.”

Arthur Krummel, a member of the 145th Infantry of the National Guard, witnessed the downtown riots, including a bonfire held off Route 59 on Friday, May 1. Krummel commented on the large number of students protesting; there were eight guardsmen in his squad.

The Guard lined up and was told to disperse the crowd of students. They were ordered to lead them in the direction of campus, according to Krummel’s testimony recorded through the Oral History Project.

“We lined up, and at that particular time we were not — we had no bullets and no live ammunition or blanks for that matter,” Krummel said in the interview. “We had our gas masks and our rifles and our bayonets and our, you know, combat gear. We looked pretty ferocious, but of course, we were just about as scared as anyone.”

The danger of the situation slowly dawned on Krummel as he stood with his rifle and bayonet, he said. Their rifles had no live ammunition at the time.

Krummel said he realized these students could have easily overpowered the Guard at this time. He could not fathom using his bayonet on one of them.

Forty-five years later, the U.S. Army continues to have a strong presence on the Kent State campus. Despite the tragedy of May 4, the military services on campus do not feel negative effects from the events surrounding the shooting.

The ROTC uses May 4 as an opportunity to learn from past mistakes and train the cadets as leaders.

Fox focuses on the “rules of engagement,” which means how far the Guard can use the escalation of force until it becomes more destructive than helpful.

Fox said he acknowledges the importance of May 4 and Kent State’s history and how the events of that day resonate with the university’s legacy today.

“May 4 is a tragedy that is part of all our history. It really is,” he said. “Here at the Army ROTC program we talk about it. One of our cadets was killed on that day. Not many people know that.”