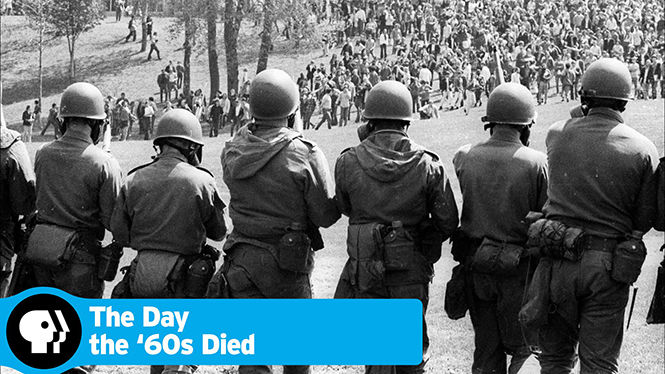 PBS premiered two documentaries that focused on the events leading up to and surrounding the May 4 shootings at Kent State as well as its aftermath.

“Dick Cavett’s Vietnam,” which premiered Monday, April 27,  tracks how the war started, how America got involved and the effect of the war on America. It chronicles all the way to 1973 when the United States signed the peace accords in Paris, film director John Scheinfeld said.

Scheinfeld came to Kent State for a special showing of the documentary on April 30 and spoke to a film studies class in the School of Journalism and Mass Communication.

He said he was inspired by the Vietnam War and the events during that time to create this documentary.

“I’m of the generation that was faced with serving in Vietnam,” Scheinfeld said. “So Vietnam has always been of interest to me. I was around to see the division in country that it created…I had to find a fresh, interesting way to tell that story.”

The idea was spurred on during his research for another documentary he directed called “Dick Cavett’s Watergate.”

He looked at the Watergate scandal in American politics through the prism of interviews conducting on late night talk show by Dick Cavett, Scheinfeld said.

“When we were going through all the shows in the Dick Cavett library to choose the best ones to tell the Watergate story, we realized that there were so many shows that Dick had devoted to discussing/debating Vietnam and thought there could be a documentary in this,” Scheinfeld said. “So because the Watergate show had done so well for PBS, the network ordered ‘Dick Cavett’s Vietnam.’”

Scheinfeld said the film examines the events in an interesting way for people who aren’t on campus, who maybe don’t know all the details. He said he sees his film as a success if it lets people understand what Vietnam was and why it had the effect it had on the U.S.

“I think it’s a great film,” said Traci Easley Williams, an associate lecturer in JMC and Pan-African Studies. “I think it talks about the Vietnam War in a different way than we’ve seen any other documentary. It’s just put together really well, and even though you’re learning something new, it’s also entertaining.

She said it’s a way to understand these perspectives of all the people during that era and how they felt about the war.

“I really liked how John (Scheinfeld) pieced together the entire film,” Khantal Tigner, a team member at the May 4 Visitors Center and freshman history student, said. “I think he did a really good job.”

“The Day the ‘60s Died,” which premiered Tuesday, April 28, tells the story of events in America for the full month of May 1970. It is the history of the event told by eyewitnesses of the shootings, as well as veterans who fought in Cambodia and staff members of the Nixon Administration, according to PBS.

Williams said she believes it’s important for people, especially for students and faculty at Kent State, to remember the events on May 4.

“It was part of our history,” Williams said. “If you don’t know your history, how do you know where you’re going in the future? I mean if you don’t understand history and don’t learn about the history of the country, things are destined to repeat itself. I think we can learn from what happened here at May 4….and know how we can make sure that this doesn’t happen ever again.”

Tigner said she also believes people can learn from the events of May 4.

“Since it’s a part of this campus’ history and me being a history major, it’s always important to know history, otherwise it’s doomed to repeat itself,” Tigner said. “So I just feel people should remember May 4 because of how powerful it is, how moving it was and that it had such an impact on not just the nation but worldwide.”