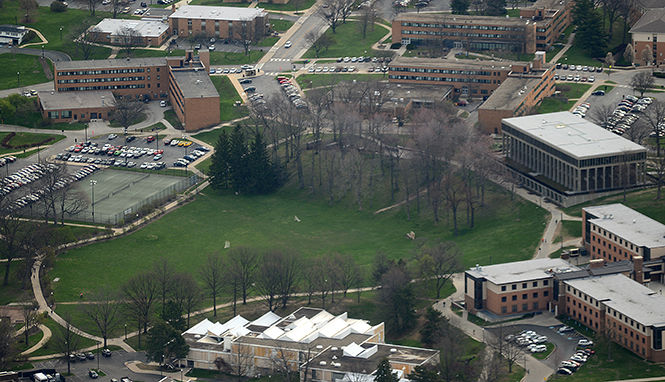 An aerial shot of the May 4 Memorial, with Taylor Hall on the right, and Blanket Hill center.

As President Beverly Warren and the university identify aspects of the Kent State rebranding process, perhaps one of the most controversial parts of the discussions remains what to do with May 4, 1970.

Warren’s Strategic Visioning Advisory Committee will host a town hall meeting on Thursday, May 7 to report preliminary findings as well as initial opinions from an external branding firm, 160over90.

Warren will also talk about #BeBoldKSU, a social media campaign students and faculty used to answer a variety of questions about Kent State. Warren reiterated in an open letter to the university that “check-in point, not an endpoint, to our work together.”

“We want to honor our history while we shape our future that goes beyond the knowledge that goes beyond the May 4 tragedy,” Warren said. “But the May 4 tragedy so defines our heart and soul about activism, seeking social justice, making sure that we are champions of civil discourse. So that’s what I see is trying to use our history to be a platform that shapes our future.”

At the March 11 Board of Trustees meeting, Warren and an external relations committee met with representatives from 160over90 to talk about what best represents the university.

“Our brand is that we’re an in-state institution where you’ll get a good education and be safe. It’s a neutral opinion and not a powerful brand,” Warren said at the meeting. “But the recognition of our brand nationwide references one day in our history.”

In the meeting, representatives from 160over90 told the committee that people outside of Kent State don’t know the university because it’s the second-largest institution in Ohio but due to the events on May 4, 1970. One of the firms’ representatives said Kent State is very comparable to Michigan State, which recruits in the same state as University of Michigan.

In a similar sense, Kent State vies with Ohio State to draw student interest and to build a strong university image.

But in order to thrive, representatives said, Kent State needs to find a way to decide whether May 4 is going to be a part of the rebranding finished product.

“We would do a lot of damage if we put those events in a box and put them away,” a 160over90 representative said during the meeting.

Jerry Lewis, a professor emeritus of sociology, who was at the shootings 45 years ago, said May 4 will always be a part of Kent State’s brand.

“When people hear Kent State, they think May 4 because it’s such a salient issue,” Lewis said. “I gave a paper in England on violence, and when the Q&A section started, they started asking me about May 4. And this was in England. When people talk about May 4 and the shootings, it gets transferred into every day.”

Although students aren’t directly affected by the shootings, they still take the issues to heart 45 years later. The university hosts annual events to educate students and faculty and to remember the lives lost in the tragedy, and there’s a Visitors Center mere feet from where the shootings happened. Last September, students even expressed collective outrage over Urban Outfitters’ red-stained sweater because it closely resembled bullet wounds.

“It’s so very important to us to make sure that May 4 isn’t simply a date,” Warren said. “For us, Mat 4 is a commemoration of who we are and how that moment shaped us.”