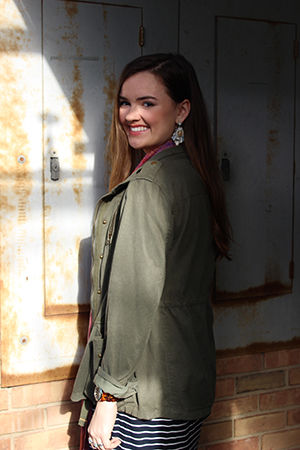 As Rachel Broas sat beside her father within the church pews, ignoring the pastor’s sermon, her father turned to her and said, “You know, I think you should call your fashion line ‘Simply.’”

And so the journey began. Somewhere between that conversation and January 2014, “Simply” transformed into Simply Poised, the fashion blog written by Broas. With a few product reviews and guest blogging opportunities completed, the Kent State sophomore fashion design major seems to be on the springing board to success.

Despite the sleepless schedule that comes with being a student and running a blog, the Texas native said that it still doesn’t feel like a job.

“It’s a nice outlet when I’m stressed because I can just say, ‘OK, I’m going to take pictures and act like I don’t have homework,’” Broas said.

This isn’t to imply that it is all just a big game of dress up to the 19 year old. After going an entire year without getting any exposure from Simply Poised, Broas reached out to companies, setting things in motion. From there, she has received clothing and accessories for product review and has had the opportunity to guest blog on websites, such as KandyKiss.com. Due to these efforts, she now has about 2,000 consistent readers every month.

“I think it’s all about perspective and how you look at it,” she said. “If you’re not in it, I wouldn’t do it because it is very time consuming.”

Among the companies Broas has partnered with, Judith + Jame, is one close to her heart. The clothing line by Anna Taylor has given women in Nairobi, Kenya, a chance to better their own lives. Anna Taylor employs these women exclusively to make her clothing line.

“It’s fun to be able to connect with companies like that and make friendships,” Broas said.

However, her interest in fashion started well beyond the forming of her blog and her acceptance to Kent State’s Fashion School. It started in her childhood. She said she used to get really irritated when her mother would try to pick out her outfits, and she would nearly sob when she couldn’t make the styles that she envisioned.

Broas finally decided to become a part of the fashion industry after having a middle school English teacher, who, as few people knew, was also a stylist for Nordstrom. After visiting her at her job in high school, Broas then knew that she wanted to become a designer.

“I remember she said, ‘Don’t let anyone tell you that fashion isn’t worth it,’” Broas said.

Unlike her former teacher, Broas’ pursuit is no secret to her family and friends. Many of them assist her with her blog, like Hannah Fisher, a sophomore speech pathology major who takes photos for Simply Poised.

“We always have the same ideas in mind about what we should do,” Fisher said. “We are always on the same page.”

Broas mentioned, with a small laugh, the way her mother calls her with proof reading mistakes and how excited even her younger brother and sister get every time something new is posted on Simply Poised.

Being so far away from her tight-knit family has posed challenges for Broas but also has given her a chance for personal growth.

“I feel like when you are far away from home, you grow up really fast,” she said.

These bonds and relationships affect the way Broas approaches her own personal style and designing.

“At home I’m always outside with my siblings and my friends,” Broas said. “We’re constantly on runs and at the lake and on bike rides, and then here (in Ohio), we kayak and canoe. I think just being outdoors goes hand-in-hand with my style.”

The neutral tones and bright colors found on these outdoor adventures come alive in Broas’ style, which she describes as a collage of preppy, Bohemian and feminine.

As Broas prepares to embark on her next journey to Florence, Italy, in the fall, she will likely take these roots, as well as her readers, across the ocean with her.