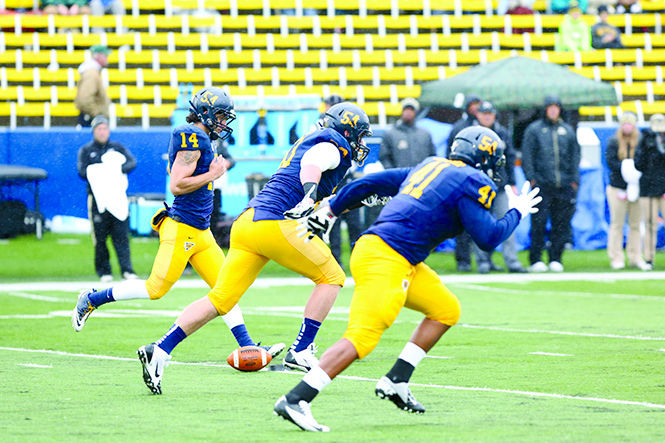 This past February, athletic director Joel Nielsen, in accordance with other athletic department staff and President Beverly Warren, sent the Football Ticket Attendance and Revenue Audit to the NCAA confirming that Kent State met the NCAA’s Division I Membership Requirement for Attendance by averaging 15,000 in home football game attendance.

The internal audit Nielsen sent to the NCAA verified the attendance figures for Kent State’s six home games in 2014, which can be viewed in the DocumentCloud items on this page.

The NCAA Division I membership requirement for attendance, as stated by the bylaw 20.9.7.3, was successfully compiled for the 2014 season, but how did Kent State manage to hit the mark this season — a year when they had to meet the requirement — especially considering the evident poor attendance for this year’s home games?

Only 5,118 people attended the Akron game, which is a game the athletic department typically banks on raking in the most revenue from ticket sales. And just strictly based on a simple eyeball scan of the home crowds, Kent State struggled in the way of actual attendance. Even the Homecoming game against Army in October was poorly attended by the Kent State faithful.

Nielsen said the department does its best to predict ticket sale patterns, but some seasons like 2014 prove more difficult to forecast than others.

“We try to do some forecasting (for each game’s attendance) before the year starts…and then we just fill in with some of the corporate ticket buys throughout those (home) games,” Nielsen said. “First we forecast, and then we fill in based on how attendance is. We’re getting pretty close to predicting (attendance patterns for games), but weather is the one big factor in there that really just blows us out of the water.”

Despite weather spoiling much of the department’s expected turnouts this fall, Kent State still managed to comply with the NCAA’s requirement, averaging 15,898 in paid attendance per the NCAA’s mandate.

Strictly based on attendance numbers, Kent State would struggle to make it, but the team is able to continue playing through paid attendance.

“The tickets that are distributed and purchased that count as paid tickets to the NCAA, it doesn’t matter if a person shows up or not,” Ticket Office Manager Eric Fronczek said. “They still count because it’s a paid ticket and it counts by NCAA standards, so you could have a game where 20,000 tickets are sold and zero people show up, and there’d be nobody there, but those tickets still count.”

Where do all these extra tickets come from to meet such a lofty attendance requirement mid-major schools like Kent State are expected to meet?

Although Nielsen denied that the department buys football tickets at the end of a football season, he confirmed that it does in a way buy its own tickets to meet the NCAA’s requirement.

As The Kent Stater reported in a previous story that ran toward the close of last semester (before Kent State had officially completed its audit to the NCAA), the athletic department receives funding from outside corporations every year through marketing and licensing agreements with companies such as Amtrak and International Management Group (IMG).

“We have a third-party agreement that buys tickets that we then give out to charitable organizations,” Nielsen said. “They’re called Flash Forward tickets. The money’s coming from third-party vendor agreements (and) marketing agreements such as with IMG. We use some of that marketing money. Some are licensing money that we receive for the logoed products and that sort of thing. It all comes from third-party vendors, and (with) that money coming into the department, we purchase tickets with those and give those to charitable organizations.”

IMG, “a global leader in sports, fashion and media operating in more than 25 countries around the world,” became a sponsor and licensing partner when it signed a license agreement with Kent State in 2007. Under the terms of their agreement and partnership, Kent State “is the owner of certain athletic properties and desires to grant the license (or give permission to use those properties in accordance with the License Agreement) for those properties to (IMG),” and IMG “desires to license those properties and to promote them for the mutual benefit of (IMG) and KSU.”

In layman’s terms, Nielsen explained that every year, IMG writes a check to Kent State pursuant to their licensing agreement, and it’s at Nielsen’s discretion to decide what to do with that money. He said during a season when the department must meet the bylaw, he uses the money IMG provides to buy tickets, which are given to charitable organizations such as Big Brothers Big Sisters.

“That’s when you have those third-party vendors buy tickets for you to give to those charitable organizations,” Nielsen said. “We only do that every other year to meet the NCAA’s required ticket numbers.”

In the off years when there is no set ticket sales goal, Nielsen diffuses the funds into the budget wherever he sees fit.

“The money just goes into a different revenue source, not particularly into buying tickets,” Nielsen said. “We still get the same money from whether it’s a marketing agreement or a licensing agreement, it just doesn’t go into that line item to buy tickets. It goes into the marketing line item or somewhere else.”

Without licensing sponsorships and corporate agreements like this, Kent State would be in violation of the NCAA’s bylaw and would issued a letter of noncompliance, which puts the school on notice that it must meet the mandate the following year.

“It’s all putting the effort in to get those corporations on board and sell tickets, that’s a big part of (meeting the NCAA’s mark),” Fronczek said. “This year was another good year as far as groups and corporations buying tickets goes.”

“We don’t purchase any tickets with any of the revenue that’s coming into us that’s not a third-party revenue,” Nielsen said. “The revenue that comes in from student fees is pretty standard each year. There’re blips every year based on our total enrollment numbers, but it’s a pretty standard number every year. That money goes toward other things. We don’t take that money and buy tickets. That just doesn’t happen.”

The Stater will continue to investigate more on this story as new developments surface.