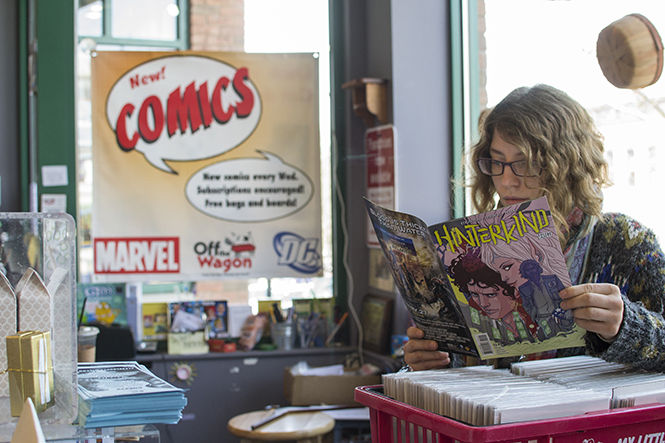 An employee at Off The Wagon, reads a comic book.

It’s a bird! It’s a plane! It’s your favorite comic strips moving from your shelf to your screen with apps like ComicCafe and GoComics.com.

“The Sunday afternoon where a young kid would sit under a tree and flip through a comic is long gone,” Tim Barrow, “The Colonel” of Colonel’s Comics in Kent, said. “I see the older comics still being collected, but the silver age of comics is gone, and they’re moving farther away from print editions.”

Digital comic sales have increased 260 percent over the last three years, according to ICv2, which, according to its website, is the “#1 source of news and information for the buyers, gatekeepers and tastemakers on the front lines.”

Guy Gilchrist, a syndicated cartoonist who worked on Jim Henson’s “The Muppets” comic strip and has been penning the “Nancy” comics for 20 years, has watched the industry change.

“My mom would take me to work with her, and she would open up the paper and pages of funnies and say ‘draw that,’” Gilchrist said. “I started out drawing the funnies.”

He began working for Weekly Reader Books and got his big break with “The Muppets” cartoon strip in 1981. He has also worked on cartoons including “Teenage Mutant Ninja Turtles,” “Looney Tunes” and “Tom & Jerry.”

Comics have always been a part of his life, and he’s seen them adapt to the times.

“Comics are really wonderful and can be positioned for the digital world because they’re in panels, and then the content can be scrolled very easily,” Gilchrist said. “Now, we’re on every single form of social media, and you can read ‘Nancy’ on every platform.”

Although the switch to digital may have changed the distribution process, it hasn’t affected how Gilchrist works.

“The most important part of the creative process for me is the writing, and actually, that hasn’t changed at all,” Gilchrist said. “I still write everything down in longhand in those old black-and-white composition books.”

“Nancy” is a daily comic strip that has been around for 80 years. Gilchrist said GoComics and social media platforms have increased the comic’s viewership to 57 million readers around the world and allowed him to connect with all generations.

“If I’m doing my job correctly, then what should be going on is that when you ask older people ‘How old is Nancy?’ they’ll say, ‘Oh man, what is she about 100 now? She’s been around forever!’” Gilchrist said. “If you ask a little kid how old Nancy is, they’ll say ‘I don’t know. Eight?’”

Gilchrist said that the large selection of comics online allows readers of his newer comics to discover older ones for the first time. As readers get their first glimpse of his work, Gilchrist is constantly trying to come up with new ideas for comics every day.

“You just take your own life and try to put it into panels,” he said. “You also look around you and pay attention to what everybody does. I should probably wear a T-shirt at all times that says ‘Warning: Cartoonist Coming.’”

Comics are becoming more interactive with animation, and audio is a possibility in the near future.

“I think it’s going to be more prevalent that every cartoonist will have a camera set up and people will watch them draw,” Gilchrist said.

Currently, Gilchrist is working on a virtual classroom where he can teach people how to write and draw content, along with teaching the business side of being a cartoonist.

Digitization has allowed for there to be more comic content, which makes for more laughs spread to a larger audience.

“If I can make you smile with something silly that I do or I can tell you a story that will touch your heart in some way,” Gilchrist said, “well then you’re probably going to read the next day.”