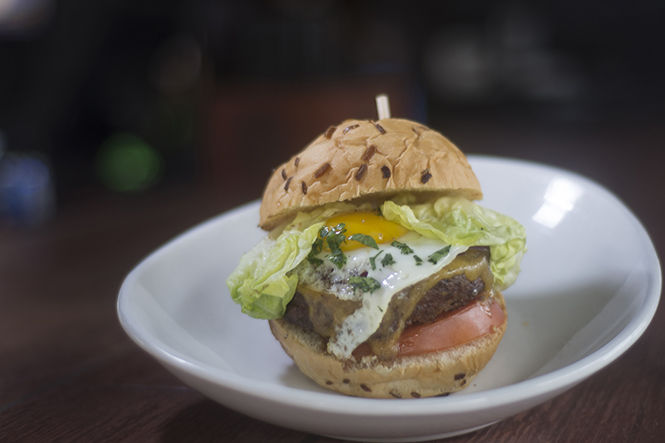 Skimming through a Bar 145 menu offers a moment of confusion at first, with options, such as the Apple Pie Burger, challenging every expectation you’ve had of the classic American burger.

Once you get past the initial shock, you see the genius in their flavor combinations and wonder why you’ve never thought to try it before.

“We get all of our food from local businesses, so we bring quality to our concepts to bring you burgers with a little bit of everything,” Jemar Johnson, Bar 145’s general manager, said. “There’s always something new to try.”

Bar 145’s most popular burger is the Simpleton, which pairs cream cheese with roasted onions and maple bacon and is served up on a caramelized onion roll.

Johnson also said that a new spring and summer menu is on the way, with hopes to throw the bison burger onto the list of unexpected choices.

The Mo-Fo Burger at Ray’s Place has been serving up mouthfuls of flavor for 35 years. Two all-beef patties are topped with a plethora of toppings: mayonnaise, relish, mustard, ketchup, tomato, onion, pickles, bacon and mushrooms.

It was even featured by Food Network chef Michael Symon on “The Best Thing I Ever Ate.” In addition to great burgers, Ray’s Place also serves sandwiches, appetizers and dinner entrees.

“I eat everything, even after all of these years,” Charlie Thomas, Ray’s Place owner, said. “It’s just got that homemade taste that makes for a good meal.”

What makes a Five Guys burger unique is that it can be however plain or elaborate you would like.

All of the toppings you could possibly want are within your reach, from grilled mushrooms to jalapeño peppers.

Five Guys is equivalent to fresh. Manager Pat McMillan said there is no freezer in the restaurant, and burgers are hand-formed every morning. The most popular burger is the two-patty cheeseburger, which can be jazzed up to your liking. The relaxed environment adds to the experience.

“We try to make the atmosphere as fun as possible,” McMillan said. “We want it to be like you’re in your backyard cooking your own burger, listening to music and just having a great time.”