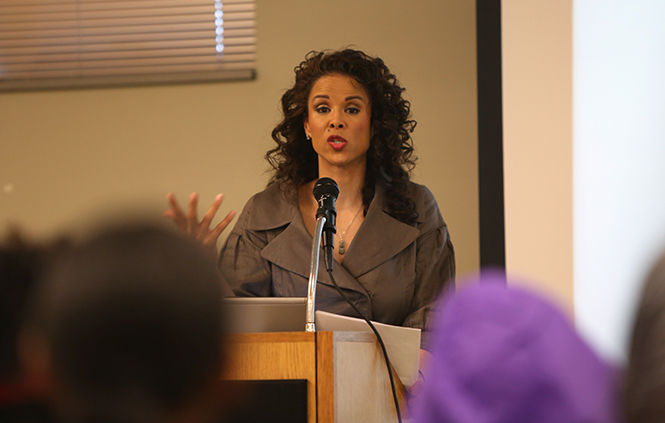 Sil Lai Abrams talks to a goup of students in Oscar Ritchie Hall about domestic violence and inaccurate portrayals of women in reality TV showson March 31, 2015.

In recent months, the phrase “black lives matter” has become a widespread slogan in the movement against police brutality in urban communities. But how many people know that the origin of these groundbreaking words lay in the hands of three black women?

This is the question keynote speaker Sil Lai Abrams asked of her audience at the Redefining HERstory event on Tuesday, March 31.

Abrams is the founder and CEO of the organization Truth in Reality. For the past six months, she has collaborated with Kent State in promoting the program.

“Our mission is to change society’s acceptance of gender-based violence and retainment,” Abrams said. “We want to create more balanced depictions of women of color in the media.”

When Abrams asked the audience about the origins of the “black lives matter” slogan, no one seemed to know the answer. In Abrams’ opinion, this is an example of how women of color are misrepresented in the media. The issues and accomplishments of black women are overshadowed and ignored.

Instead, the media and entertainment industry are more likely to give women in minorities a platform on reality TV shows.

“I want to spread awareness about the perceived relationship between reality television programing and racist stereotypes about women of color. They can lead towards increased acceptance of relational aggression and gender-based violence in the black community,” Abrams said.

Through Truth in Reality, she said she hopes to encourage minorities to not let reality TV programming influence how their culture is viewed.

“The event opened my eyes a lot to what women do in the media,” said sophomore accounting major Sha’miah Lindsey.

Lindsey said that she sees evidence of violence and stereotypes depicted in TV shows like “Love & Hip-Hop” and “Basketball Wives.”

“As far as the media shaping the narrative for young black women, I have younger siblings that I see are starting to shape their identity,” said Bobby Whipple, junior Pan-African Studies major. “You see a lot of media influence. It’s critical that we have some kind of dialogue centered around how society itself is contributing to the shaping of our identity.”

For the past six months, Shana Lee, the director for special projects and initiatives in the Division of Diversity, Equity and Inclusion, has worked with five other coordinators to bring the Redefining HERstory movement to Kent State.

“We’ve had Twitter talks every week, and they vary on different topics,” Lee said. “We had reality TV check parties. We’d come together and watch a show and talk about the different images that were portrayed.”

As a survivor of domestic violence and woman of color, Abrams uses her experiences to carry out the goals of Truth in Reality successfully.

“You can help by example,” Abrams said. “If you don’t like the way that we are being represented, do not promote the shows that present the stereotypes. Create your own content. Do not be afraid to use your voice.”