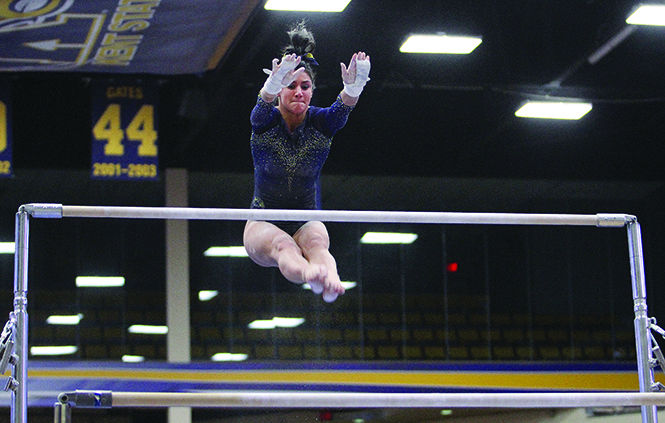 Only a freshman, Rachel Stypinski emerged as a leader from the very start of the gymnastics season, and now she will represent the Flashes as an individual qualifier at the NCAA Gymnastics Regional on Saturday.

As the 2015 Mid-American Conference Specialist of the Year and co-MAC Freshman of the Year, Stypinski will perform on the balance beam and in the floor exercise. Her career-highs are a 9.900 on beam and a 9.950 on floor, which she achieved twice during the season.

“To prepare for regionals, I’ve been keeping up with my routines in practice and trying to stay as consistent as possible,” Stypinski said. “Being a freshman going to regionals, it is very nerve-wracking, especially since my team won’t be competing with me. I know they are going to have my back even though they aren’t out on the floor, which makes my nerves calm a little bit.”

Kent State won the 2015 Mid-American Conference Championship on Saturday, March 21, with a score of 196.375 in the M.A.C. Center. The Flashes have never lost a conference championship meet they hosted.

While the season was tumultuous, Stypinski said she took away key lessons she’ll use this Saturday.

“The season prepared me because I know how to control my nerves, and my confidence level increased a lot after this season,” Stypinski said.

Stypinski walked away from the MAC Championship with a third-place finish on beam, 9.850, and tied for first on the floor with a 9.900.

“I’m very excited to see what regionals has to bring,” Stypinski said. “(The MAC Championships) was an incredible moment for my team, and I’m not done having these moments this year.”

Stypinski will have a practice day on Friday, April 3 and then will compete on Saturday, April 4, starting at 6 p.m. in St. John’s Arena in Columbus, Ohio.