Students in recovery after two-car collision on Loop Rd. 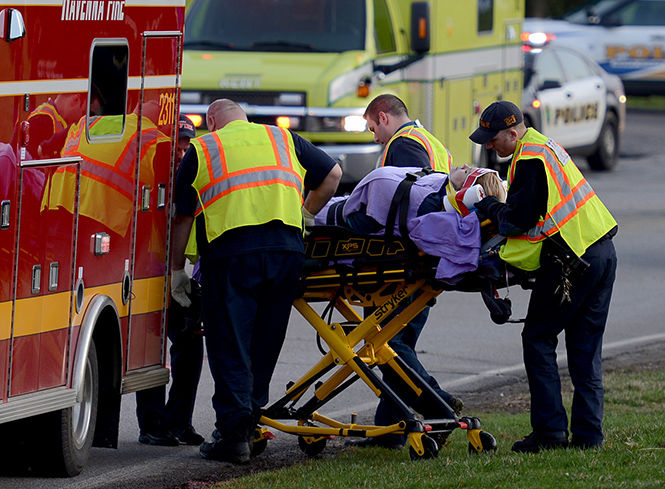 The Kent Stater A female involved in an accident on Loop Road is loaded via stretcher into an ambulance and taken to the hospital on Wednesday, April 8, 2015.

Editor’s note: This story has been updated to reflect the Ohio State Highway Patrol’s investigation into the accident.

The Jeep’s passengers were Kent State freshmen: exploratory major Tanner Hoose, marketing major Brandon Fisher and business management major Garrett Cheran. Contrary to a prior report from Sgt. Larry Jones, trooper Nathan Krug of the Ohio State Highway Patrol said Thursday afternoon that it is investigating if Stiles was under the influence of drugs while driving.

Krug saidHoose, the driver of the Wrangler, and Stiles went to Robinson Memorial Hospital in Ravenna, and Fisher and Cheran went to Akron City Hospital for treatment.

Krug said patrolmen are still investigating how fast both vehicles were going before the accident.

Sgt. T.J. Homrighausen, an Ohio State Highway Patrol trooper, said the Jetta collided with the Wrangler about 495 feet from the intersection of Loop and Summit roads.

Both Kent Police and Fire departments responded to the scene of the accident, university spokesman Eric Mansfield said.