Football trampled over in loss to Central Michigan 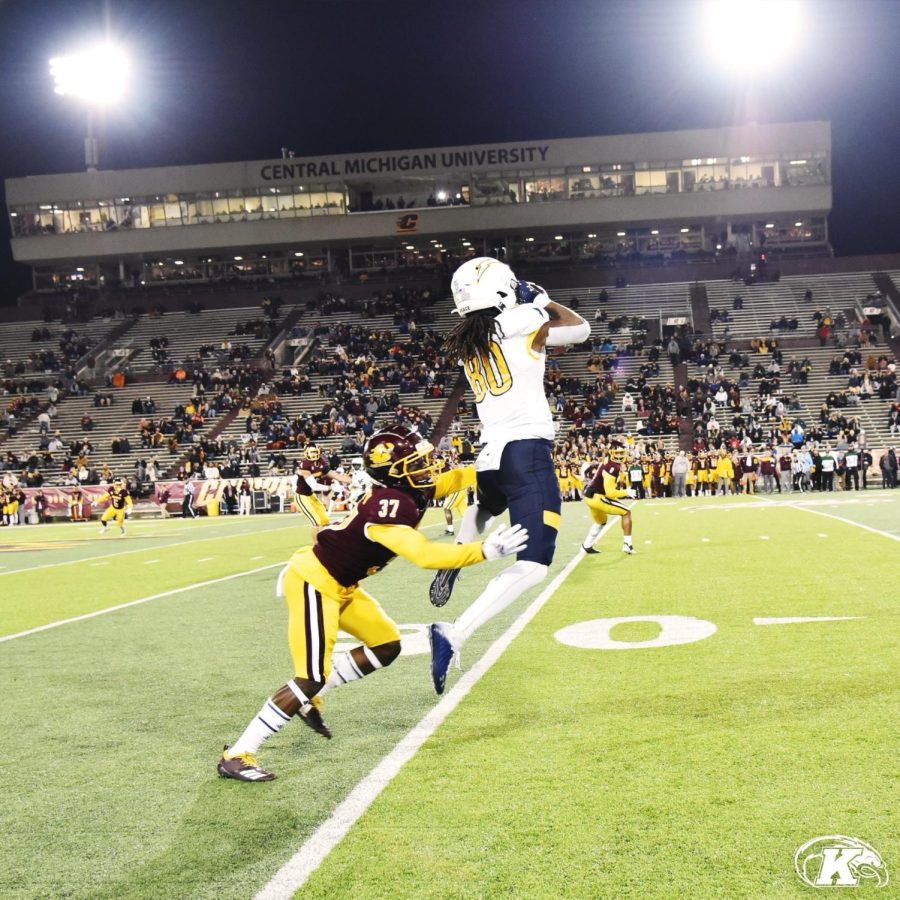 With 10 minutes to go in the fourth quarter, redshirt freshman running back Lew Nichols ran over a Kent State football defender on his way into the end zone.

The 12-yard touchdown put Central Michigan back up by 17 points, and Nichols had sealed the win for the Chippewas, who beat the Flashes 54-30 Wednesday.

It was a fitting way to end the game, as Nichols both literally and figuratively ran all over KSU’s defense, rushing for 215 yards and four touchdowns, both career highs.

“We knew that coming in we were going to lean towards, and we always do, stopping the run,” he said. “[Central Michigan] did a nice job up front. We have to do a better job of taking care of the football so that there’s time for corrections on the side so that we can then get settled in and play cohesive and together as a family.”

Nichols, who averaged five yards per run, was a workhorse all night. The Mid-American Conference’s leading rusher ran the ball 43 times and caught four passes for 33 yards.

“Great runner,” Lewis said. “Great vision. Has one cut and gets downhill. He plays behind his pads really well. He was as advertised.”

Kent State is 1-4 when it allows 200+ rushing yards. Nichols ran for more yards than any other running back against KSU this season.

In a game that was dominated by Central Michigan, the first quarter was controlled by the Flashes.

KSU quickly capitalized off the defensive stand when graduate student quarterback Dustin Crum threw a 37-yard touchdown to graduate student tight end Kris Leach, who reached across the goal line as he was being brought down.

Lewis said in his press conference on Friday that Pimpleton was the CMU player that stuck out the most to him. And with Pimpleton coming off a game where he scored three times in a five-minute span, twice on a punt return, who could blame him?

Lewis emphasized that Kent State had to stop Pimpleton.

And the Flashes did that. Pimpleton was unable to return any punts, and he only had 56 receiving yards, his first sub 100+ game in a month.

“We knew that he was a threat coming into it,” Lewis said. “We limited one. Unfortunately, we didn’t limit the others.”

On the next play, sophomore defensive lineman Adin Huntington put pressure on Richardson who took off for a 2-yard gain before Huntington tackled him and forced a fumble.

CMU recovered the ball, but was forced to punt.

Kent State drove down the field in three and a half minutes, one of their longer scoring drives of the season for a team which last week didn’t have a single one longer than two minutes, and scored on a 2-yard touchdown run.

On the ensuing kickoff, freshman kicker Andrew Glass launched the ball right at a Central Michigan player. The ball knocked off of the player and bounced back towards the Flashes.

KSU recovered the onside kick, and started their drive close to midfield.

Lewis said his team did a great job executing at the start.

“We settled into the plan,” he said. “We did some good things.”

A touchdown would put Kent State up by three touchdowns in the first quarter, and the game would be firmly in their hands.

Instead the Flashes went three-and-out and punted the ball away.

The Chippewas drove to the 23-yard line, where they faced a 4th and 1. Nichols plowed through the KSU defensive line for a 9-yard gain. He ran the ball 13-yards to the 1-yard line on the next play and powered into the end zone on the next.

Kent State’s offense traveled into CMU territory, but senior defensive lineman Troy Hairston came crashing into the backfield as Crum was handing the ball into graduate student Xavier Williams’ hands on a run-pass option play and forced a fumble.

Central Michigan recovered, and scored on a 18-yard pass from Richardson to junior wide receiver Dallas Dixon. They missed the extra point, keeping the Flashes in front by one point.

Richardson completed 21-of-27 passes for 268 yards and four touchdowns.

KSU’s secondary is last in the MAC, allowing 297.9 passing yards per game.

But redshirt sophomore wide receiver Dante Cephas had the ball stripped from his hands by senior defensive back Alonzo McCoy while running downfield on a 15-yard pass, and the Chippewas recovered their second-straight fumble.

Kent State came into the game with the second-best turnover margin in the FBS at +15. It was -3 on Wednesday.

Lewis said that anytime you turn the football over, it isn’t going to be advantageous for you.

“It’s something that we’ve executed really, really well leading up to tonight,” he said. “After [the turnovers] we started to press a little bit, and when you start chasing points you don’t get as balanced. That makes it more challenging to execute because you’re becoming a little bit more one-dimensional.”

KSU only had one turnover in MAC play, but they had three on Wednesday, all fumbles.

A failed two-point conversion made the score 19-14, and momentum had quickly swung in CMU’s direction.

The Flashes, who are in 12th place in the conference in points allowed per game against MAC opponents 41.7, gave up touchdowns on the next four drives.

KSU’s offense, which leads the MAC in points per game against conference opponents with 37, scored two touchdowns in that time.

But they would also settle for a field goal, punt twice, and turn the ball over on downs.

And by the time Kent State finally forced a punt to end CMU’s scoring streak, it was down 47-30 with only four minutes left.

That punt bounced off of a KSU’s player shoulder and Central Michigan recovered it on the one-yard line. Nichols scored on the next play.

“There were spots where we played really, really well,” Lewis said. “We came out fast. At the end of the first quarter, beginning of the second quarter we had some self-inflicted wounds that hurt us and we never recovered from.”

Crum completed 28-of-38 passes for 322 yards and two touchdowns.

Cephas led the team with 100 receiving yards, his fifth 100+ game of the season and third consecutive.

The Flashes, who came into the game first in the MAC in rushing with 235.6 yards per game, ran for 134 yards and two touchdowns.

Much like its run defense, KSU wins when it can run the ball. It is 5-1 when rushing for 200+ yards.

“It’s very active,” he said. “They did a good job moving up front and winning some one-on-one battles.”

CMU went into the game as the third-best team in the MAC at stopping the run, allowing 137.8 yards per game.

The Chippewas defense is tied for 12th in the FBS in tackles for a loss, and they added six more against Kent State.

Sophomore running back Marquez Cooper led the backfield with 83 yards and two touchdowns.

If KSU wins its next two games against Akron and Miami, it will clinch the MAC East Division title and be headed to the MAC Championship Game.

Central Michigan improves to 4-2 (6-4) and is in second place behind Northern Illinois in the West. NIU beat Ball State 39-38 Wednesday.

Lewis said on the road ahead his team needs to “execute the simple things.”

“We need to communicate at a higher level,” he said. “We need to value the football more. We need to play complimentary football to where when we get stops, we can’t give back free possessions.”