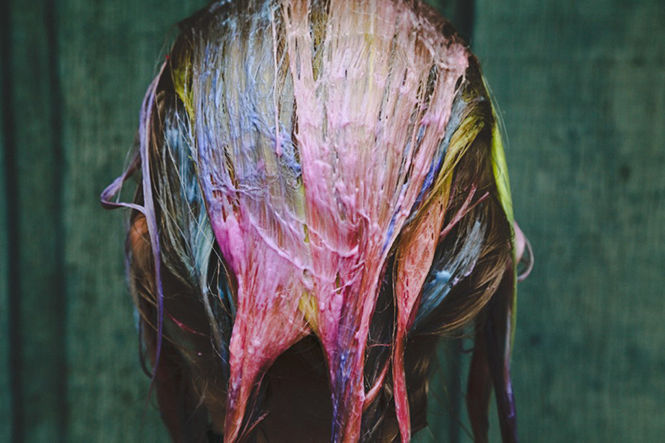 In an attempt to “stick it to the man,” women across the nation are celebrating feminism by raising their arms to reveal shockingly bright colors.

The trend first started gaining popularity in September 2014 when Seattle stylist, Roxie Hunt dyed her co-worker’s underarm hair a shade of aquamarine blue, according to several media outlets. Hunt said she was looking for a creative way to complement her coworker’s blue head of hair, and the woman agreed to the experiment. Pleased with the results, they posted a photo of the finished look and a DIY tutorial to Hunt’s blog, “How To Hair Girl,” only to receive immediate positive feedback.

The two declared it to be a feminist statement: “By having hairy pits,” she writes, “I am exercising my right to make my own choices about my own body.”

The trend is slowly going viral. And with warmer weather on its way and sleeveless tops reappearing, photos of eccentric women with colorful pits are sporadically popping up on social media, labeled with hashtags like #freeyourpits and #dyedpits.

In an interview with the Washington Post, Hunt said, “I would hope that in the next few years we can normalize the concept and female body hair and change the dialogue about what this country considers naturally beautiful.”

Hunt’s point is clear: She’s not proposing that everyone revert back to their unruly roots and leave their body hair untamed. She’s not anti-hygienic or a reincarnated hippie. Rather, she’s suggesting that we analyze and understand the pressure that society puts on women to look a certain way and then decide for ourselves how we want to react to these pressures. She’s making more of a statement for freedom of choice than anything.

Maybe our society needs a bold statement like this to really set equality in place. The combination of neon colors on an all-natural canvas eliminates presuppositions about women who don’t shave their pits being hippies and people who dye their hair bright colors being punks. It creates a no-judgment zone.

A comparable phenomenon is happening among trendy young men. Not exempt from strict societal beauty ideals, some daring individuals have been dying their facial hair neon colors. For years, men have struggled to appear as close to naturally perfect as possible. They presumably can’t wear makeup or spend too much time on their hair, but they have to look clean and attractive with what they’ve got. In the past 15 years, the bearded look has revived itself in the “lumbersexual” trend. But even this must be regularly trimmed and tamed in order to uphold social standards.

Perhaps the colorful beard is a way of questioning what’s considered masculine. Andy Butler, a D.J. and electronic musician, was interviewed by the New York Times on his pink beard. He doesn’t think this is a trend people will latch onto for very long — the bleaching process is “intense and unnatural.” However, he said he believes it temporarily makes a statement for gender freedom.

“That moment was very specifically in line with the queer revolt,” he said. “Yes, a beard is masculine, but what if it’s pink? Is it still masculine then?”

The blending of neon with natural trends, such as these, are not sustainable in terms of upkeep, but they certainly capture the media’s attention and can make a strong freedom statement.

If you feel like experimenting with this new trend, I would suggest choosing a color that’s very obviously unnatural. Blues and pinks are usually the most effective. No matter what color you choose, make sure to wear it confidently, and be prepared to get some stares. I have yet to see colorful armpits in Kent, but I’ll be on the lookout once summer comes around!