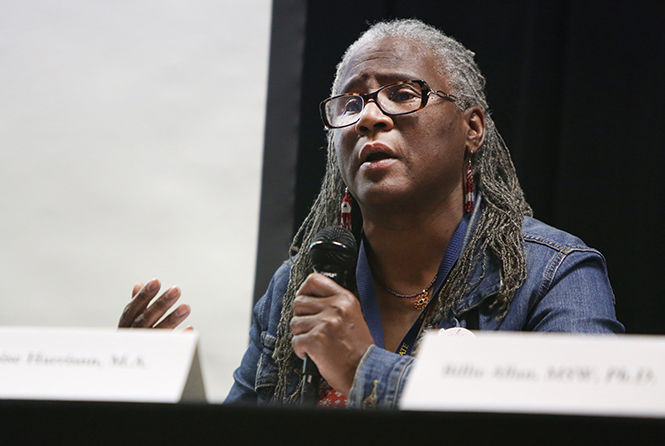 The Department of Pan-African Studies hosted its last panel discussion of the year on Tuesday night in the African Community Theatre at Oscar Ritchie Hall.

The department’s panel discussion was “Physiological Impact of Racial Violence on African-Americans and Native Americans,” which is a part of their discussion series called “Violence and the Pan-African World: Inspiring Change.”

Department chair Amoaba Gooden introduced four panelists to the audience. The panelists discussed the issues correlating between African-Americans, Native Americans and other indigenous groups that exist in our world today.

Denise Harrison, adjunct lecturer for the Pan-African Studies and English departments, told the audience that Native Americans, African-Americans and other indigenous peoples have suffered the same oppression.

She said racism has affected African-Americans critically in a physiological sense.

African-Americans are No. 1 in cancers, heart disease, Type II diabetes and AIDS cases in young women, she said.

Because of this, Harrison said the first step to eliminating these risks is to start with food and introduce children and young adults to better choices and understanding that the choices people make in the beginning can result in a healthier future.

Joseph Connolly, part-time instructor in Pan-African Studies, told the audience about the broad definition of violence against Native Americans, which also extends to violence against native lands, violence against environment and violence being done from the scientific community to native people.

Connolly said that Native American reservations were built to be completely unsustainable.

He said that in the past, the government would not grant reservation subsidies unless they sent their children to boarding schools to “civilize” them until they were 18 years old.

Rhonda Hackett, a faculty member from the University of Toronto, social worker and midwife, told the audience about the social work aspect of child welfare and how it is not bettering a child’s living situation.

Social worker and midwife Billie Allan from Toronto said that indigenous people in Canada have the worst health status.

Allan said that they have higher risks of having diabetes, cancer, cardiovascular disease, women having HIV infections, high rates of mental issues such as substance abuse and especially suicide.

Freshman fashion merchandising major Akhil Hill said these kinds of discussions are important to have for Kent State students.

“It is a part of reality; it’s a part of our society and it goes on every day,” Hill said. “A lot of us are oblivious to a lot of the things that play a big role in our everyday lives, so kind of being blind to the truth. Everyone should have access to the truth at all times so they can live a better life with more control over their life and whatever happens every day.”