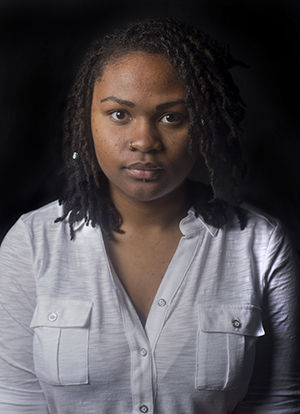 Gabrielle Cooper, Directory of Minority Affairs of PRIDE!Kent, considers herself a double minority as an African American bisexual.

“Double minority” is a term used to reference someone who represents two minority groups. One who identifies as LGBTQ, or a sexual minority, and also black, Latino or any other ethnic minority is considered a double minority.

According to a report at the Williams Institute, a research facility on sexual orientation and gender identity at UCLA Law, 3.7 percent of African-Americans identify as gay, lesbian or bisexual. Respectively, 4.3 percent of Latino-Americans consider themselves LGBTQ.

“I feel more special than anything because there is a rarity about us,” freshman athletic training major Iniah Dunbar said. “We understand a lot more and are more open to those who aren’t open to us.”

Dunbar is an African-American student who also identifies as lesbian.

“Even at home, my family says stuff like ‘That’s a white people thing,’” Dunbar said. “It bothers me because you can’t confine sexuality to one race.”

In comparison, those who identify as LGBTQ have been historically judged because their lifestyle may not be considered normal to the majority. Even recently with the new Religious Freedom Restoration Act in Indiana, services can be denied to those who identify with the LGBTQ community.

“There have been people here that have told me that I am a waste of a woman for being a lesbian,” Dunbar said. “I just love women, but people don’t always see it how I see it.”

“In the past couple of years, we’ve had an African-American Allies chair, and now we have a diversity committee,” said Brandon Stephens, the current president of PRIDE! Kent. “We use our diversity committee to give us insight on a racial minority’s perspective on being LGBTQ, which is obviously much different.”

Stephens also said PRIDE! Kent hosts panel discussions with double minority students to get an insight on their experiences, the cultural differences and even differences in language, meaning the terminology that varies from culture to culture.

“We try to educate everyone on the differences so that we’re able to understand one another better,” Stephens said.

Although the organization is still in the planning stages, Ditlevson said he hopes “to set up a safe place that will be more inclusive and representative of LGBTQ students of color.”

He said the organization will be in collaboration with the Student Multicultural Center, the Center for Student Involvement and the Women’s Center to ensure all cultural components involved in the purpose of this organization are acknowledged and utilized.

“The process hasn’t been moving as fast as I’d like, but we hope to have the organization established before the semester is over,” Ditlevson said.