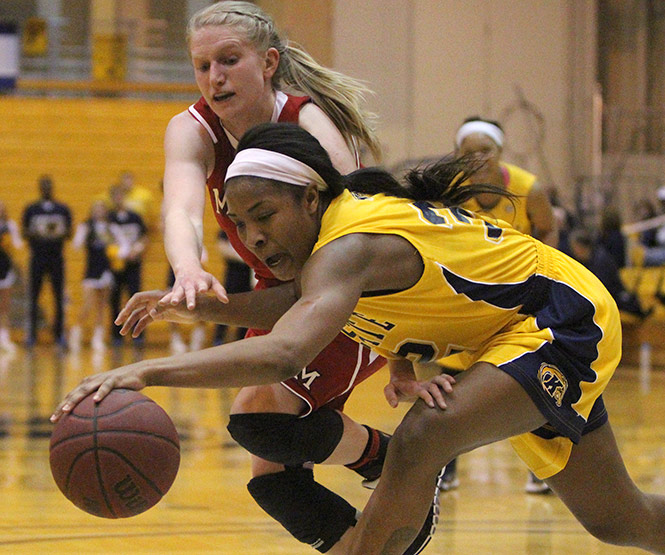 After suffering a loss to Miami University earlier this season, the Kent State women’s basketball team was seeking for revenge on Saturday.

Unfortunately, the RedHawks proved to be too much to handle in a 66-59 contest.

The Flashes (5-22, 3-13 Mid-American Conference) jumped out to an early 10-6 lead to open things up. The team would extend their lead to as big as 10 points in the first half, but the Redhawks would eventually take a narrow 35-32 lead into the half.

In the second half, the Flashes had a brief two-point lead before Miami tied things up at at 39 apiece. The game would get tied once more at 41-41, until the RedHawks finally put their foot on the pedal, en route to the victory.

“I thought we got off to a great start from an offensive standpoint tonight,” coach Danielle O’Banion said.  “Later on in the half, we started to go away from what was working for us, and we certainly didn’t help ourselves by missing lay-ups.”

The team missed a combined 13 lay-ups throughout the game, but even with all the missed lay-ups, the Flashes still had success in the paint, as the team scored 28 points down low.

Kent State had its way all game long offensively. The team finished the game shooting 42 percent from the field. A big reason for the team’s success offensively came from the play of sophomore guard Larissa Lurken, who had the hot hand all game long.

“(Lurken) did a good job of picking her spots, and she’s learning how to create her own offense, and is continuing to grow, which is really fun to see,” O’Banion said.

Despite the team’s shooting, turnovers would plague the team once again. Combined, Kent State turned the ball over 19 times, leading to 19 points for their opponent. O’Banion said both missing lay-ups and turning the ball over is what ultimately hurt her team the most.

“Ball security and missing 13 lay-ups kind of hurt our confidence on the offensive end,” she said. “We struggled with both of those all game long, and that’s just not a good combination.”

The Flashes were once again without sophomore guard Krista White, who is suffering a bad ankle, and is still listed from day-to-day.

Lurken’s hot shooting helped set her career high with 22 points to lead the team. Freshman forward Jordan Korinek and redshirt senior CiCi Shannon both finished with 11 points. Shannon also pulled down 13 rebounds to earn a double-double for the game.

O’Banion said the team will go back and watch film from Saturday’s game and fix their mistakes to help ensure a different outcome on Wednesday.

“The biggest thing for us is making sure we’re playing in a very physical way both offensively and defensively, so that we can ensure that we’re not missing those lay-ups, finishing plays, rebounding the ball and taking care of the ball on offense,” O’Banion said.