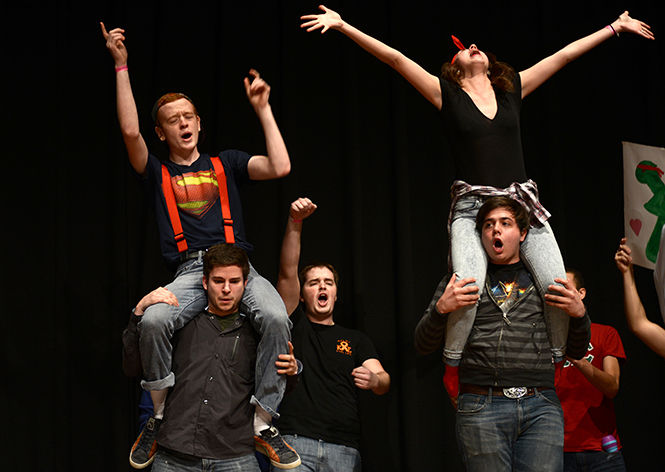 Members of the Kappa Epsilon fraternity perform in the Delta Zeta lip sync on March 1, 2014.

When it comes to lip-syncing, I would prefer it if artists refrained from the act. Either sing live or don’t sing at all, that’s my motto.

The only argument I can make for lip-syncing is for entertainment purposes. Jimmy Fallon has been known to have some lip-sync battles with guest stars like Emma Stone, Will Ferrell and Kevin Hart. “Lip Sync Battle,” a new TV show created from the Fallon skit, is set to premiere on April 2 on Spike TV with The Rock versus Jimmy Fallon as its first episode. This is I’ll aloud.

In certain situations, like these, lip-syncing can be all fun and games until done in front of a live audience that expects to hear the artist actually sing live (I know, crazy, right?). There have been some rumors of various singers lip-syncing and some have even been caught in the act. Regardless, whether it’s for time constraints, sickness or poor decisions, please don’t lip-sync.

If that’s not enough convincing, maybe some of the worst lip-sync fails will convince you otherwise:

Remember Ashlee Simpson’s stunt on Saturday Night Live in 2004? That wasn’t pretty. She went on stage performing “Pieces of Me” then when it was time for her second song, the “Pieces of Me” track restarted. Awkward. She blamed her singing over a track on severe acid reflux.

And I’m still cringing from Britney Spears’ comeback performance of “Gimme More” at the 2007 MTV Video Music Awards. She danced on stage without any effort at all, barely moving her lips along to the lyrics, making the performance awkward for all who watched. Come on, Britney!

She may be the Queen, but Beyoncé has also been caught lip-syncing, as well. Queen B was criticized for lip-syncing the “The Star Spangled Banner” at the second Presidential Inauguration for Barack Obama. Beyoncé loves singing live but blamed the lip-syncing on a time constraint with the orchestra. Apparently, she was not able to rehearse with the orchestra because she was busy rehearsing for the Super Bowl. Take some time off, B.

It’s widely known that Mariah Carey has been off her game lately. During this past Christmas season, Carey lip-synced to the popular Christmas anthem “All I Want for Christmas is You” for NBC’s Tree Lighting Ceremony, but she struggled with her high notes. An isolated version of the performance surfaced on the Internet, so praise baby Jesus for the band playing along or the crowd would’ve really suffered. But it doesn’t stop there. In February, Carey had what was probably her worst performance of all while singing at the 2015 Jamaican Jazz and Blues Festival. Carey just kind of gave up. All she had to do was lip-sync, but she didn’t even do that. She just stood there, looking like she forgot the words to her own songs.

So, either play live or don’t play at all. I would rather have a musician cancel a gig rather than not perform their best.