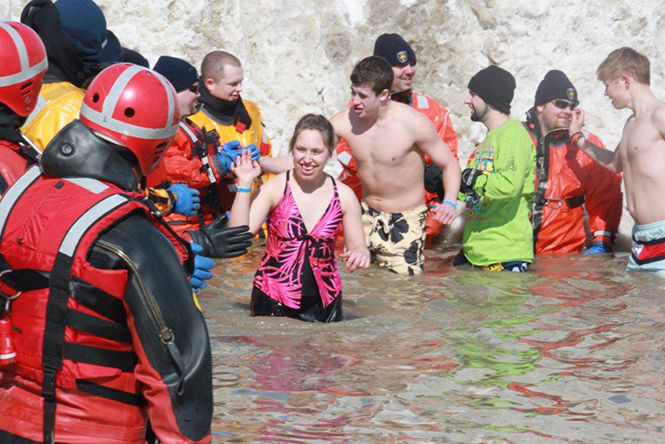 Last Saturday, Chrissy participated in the 19th annual Polar Bear Plunge in Geneva, a charity event to raise money for the Special Olympics. With a turnout of more than 400 “plungers” this year, the leap into the lake managed to collect more than $90,000 for its cause.

Chrissy, a Special Olympian herself and a nine-year Plunge veteran, is overjoyed. She and her group, “Portage Grin and Bear It,” garnered about $6,500.

With what is now an international event, a Polar Bear Plunge is, at least for novices, a ludicrous means of charity. What is a common New Year’s Day ritual in Canada often involves myriads of participants, skin exposed, dipping into frigid lakes and freezing oceans for several minutes at a time — hours if you’re doing a SuperPlunge. Yet it’s not without merit. In 2008, the PolarPalooza in Maryland, the largest plunge of its kind in the country, raised more than two million.

In 1996, a philanthropist named Sharon Bradley brought the Polar Bear Plunge to Ohio, to where the Geneva event is currently held today, on the Lake Erie-Ashtabula shoreline. For eight years it was the only of its kind statewide, until other counties showed interest. There’s now nine annual plunges across Ohio — 10 come the end of the year.

And today, as shown by last Saturday’s dip, Geneva is the place to plunge. Chandra Brode, the nine-year event coordinator, said that spot on Breakwater Beach is making a name for itself, as donations increase as the years go by. She still loves listening to naysayers with cold feet.

“I do hear every year from people if it’s dangerous or if they’re going to get sick,” she said. “I say to them, ‘It’s over before you know it.”’

There was so much thick ice on Lake Erie that Geneva local Mike Simon had to start four days in advance to dig out the plunge-area lagoon. After plowing through 15 feet of shale-like snow, a broken hydraulic line and an all-day dig on his excavator the Friday before, Simon properly set the stage. Plungers, including Chrissy and her parents, Fran and Gary, woke up at 7:30 a.m. the next morning to assess their upcoming feat. Looking out at the lake, Chrissy couldn’t wait.

Ever since she was young, she wanted to be a part of the event to help raise money for the Special Olympics, along with other fundraising. She was always looking for ways to give back. Her mother remembers trying to talk her out of plunging, fearing that it would stick.

“Chrissy told me, ‘I really want to do this,’ and she kept at it. I really thought she would forget about it,” Fran said. “But she didn’t.”

It’s typical Chrissy. Despite her developmental disability, she has more-than-willingly taken up interests in athletics ranging from horseback riding to baseball. She doesn’t like to be “labeled,” Fran said, and any obstacles for her are dealt with a make-do attitude. Her Lake Erie winter dive, it seems, is only a side gig.

As far of raising thousands of dollars? Effortless.

Motz arrived at Kent State in the fall of 2011 with a similar eagerness for a college education. Since then, she’s spent three years in the Career and Community Studies program and has plans to graduate this year. Afterwards, she has bigger goals: to marry, buy a house, work in childcare. Who knows what else lies in Chrissy’s future.

But her doctor promised she wouldn’t, and Chrissy responded with joy. She asked the doctor to join her team.

Come midday on Saturday, Chrissy held hands with her five teammates and readied her mark, with hundreds of plungers waiting on shore. A dozen members of the rescue team waited expectantly around the ice shelf with smiles on their faces. An all-too-familiar, biting cold welcomed Chrissy as she leapt into the lake.

“When I stepped in, my feet went numb,” she said. “Still, it was much warmer than the last five years.”

Instead of leaping in with her, Fran waited on the shore with the other plunge spectators, citing her usual role of team photographer. Because most of the members of Portage Grin and Bear It had to be at another athletic event later that day, the Motz family had to dry off and go. Fran said that it wasn’t without hesitation.

“She wanted to go in again,” Fran said.

Beating her personal goal of $2,400 by $600, for Chrissy, is a milestone, one for the books. She is thankful to others for what she has accomplished in the past six years — that is, $20,000 in sum — and has even higher hopes for next year’s Geneva Plunge, its two-decade anniversary bound to top the one this year. Its Mardi Gras theme seems an apt choice for the celebration.