The show drags on 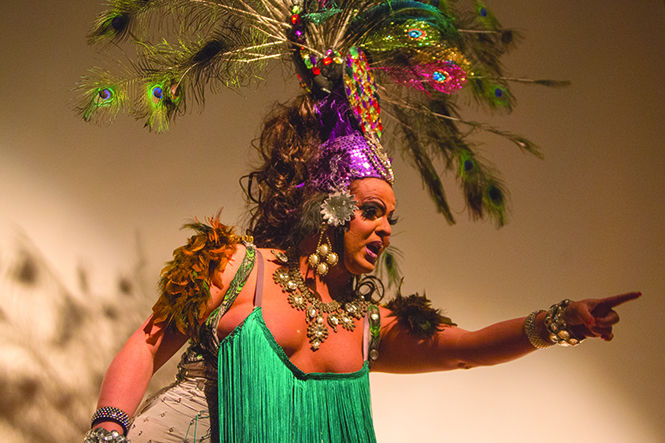 A drag queen preforms at Green with envy, a drag show put on by the Delta Lamda Phi fraternity. The show was held in the KIVA to raise money for the LGBTQ community scholarships. March 2 2015.

Flashing lights, contoured faces, five-inch heels and outfits that kill. All heads turn when the queens hit the stage.

Roughly 300 students and community members filled the seats in KIVA in support of Delta Lambda Phi’s annual “Green With Envy” drag show. The LGBTQ-inclusive fraternity was raising money for a scholarship to support LGBTQ youth.

“I was expecting maybe about 200 people, hopefully raising $1,00. But having raised $2,000 and about 300 people show is mind-boggling to me,” said Brian Wakely, a senior marketing major and president of Delta Lambda Phi.

Delta Lambda Phi raised $1,666, with a $332 donation from Eric S. VanSant, founder of the fraternity, rounding the total off to $2,000. The money from this event will be paired with money raised from future events to fund the scholarship.

“Since the only LGBT scholarships on campus were through the LGBT studies minor and you had to be a part of the minor to get the scholarships, we wanted a scholarship that could reach more people because more people than just the minor need money,” Wakely said,

Mary-Kate Rockafeller, former president of Delta Lambda Phi whose real name is Jonas Birch, started the event three years ago. He also performed the last three years as a drag queen at the event.

“We needed to have something to give back to the LGBT community at large and at Kent State because especially at that time there were a lot of problems within the LGBT community,” Rockafeller said. “We wanted to create a fund to help circumvent and to help those in need in the community.”

The drag queens danced and lip-synced to songs, engaging the audience and encouraging them to sing and dance along with them during the event.

“People don’t realize how much work goes into each performance,” freshman english major Scott McMaster said. “All the banter and comedy makes it for me. I can only imagine how empowered being up there makes the queens feel.”

McMaster said he attended the event mainly because he knew the money went to scholarship funds for the LGBT community.

The fraternity raised the funds not only by people buying tickets and a donation by the founder of Delta Lambda Phi, but also by raffling off prizes.

Mike Smith, senior computer science major and vice president of Delta Lambda Phi, said it was amazing to see so many people show up to the event in support of the LGBT community.

“This is the largest turnout we’ve had and the largest we’ve ever raised,” Rockafeller said. “It’s lovely and it makes me so proud.”