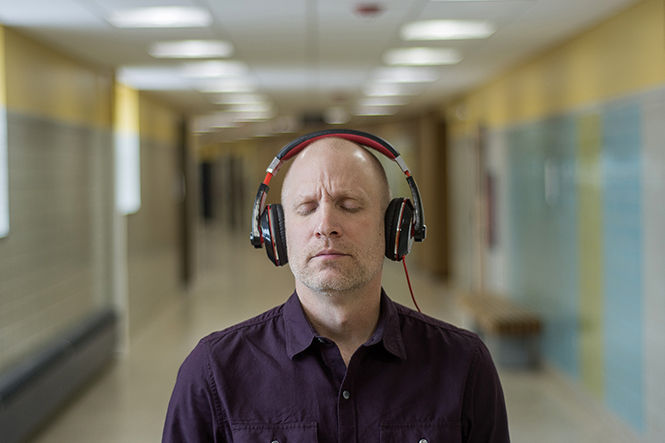 When once asked about training budding jazz players, legendary pianist and bandleader Duke Ellington once said, “The most important thing I look for when looking for a musician is if they know how to listen.”

Our sense of hearing, of listening, is a complex mechanism when analyzed and put to use, especially when concerning the operation of a composer or performer. The human ear — mostly the inner ear — can absorb any sound from 64-23,000 hertz (from rustling leaves to gunshots), and according to research done by Georgia State University, can detect the difference in sound down to a single hertz. Having a well-trained ear, for a budding musician, is not just a leg-up tool for virtuosos.

“It’s everything,” Bobby Selvaggio said. “It is, in my opinion, the most important thing” in music.

Selvaggio, as the current director of jazz studies at Kent State, certainly has his work cut out from him. He’s been a professional saxophone player and composer for almost 25 years, with numerous recordings under his belt — recently one with his No Words Quintet (named “because we’re able to communicate without words”).

But not just any type of listening.

A crash-course in Selvaggio expertise instantly delves deeper than any afternoon lounging with Kanye West or Lana Del Rey.

First-year Selvaggio students, those with aspiring positions in combos to ensembles, work on what he calls “selective listening” — that is, learning how to pick out specific timbres, motifs and shapes of sound.

Before students are primed to improvise solo, they must first learn each and every detail of the rest of the surrounding band. It is, Selvaggio admits, “a huge, huge project.”

The problem, Selvaggio said, is that most novice listeners are used to absorbing music as a “whole,” as a collective thing.

It’s what he trains students to see past, doing so by taking a song — Miles Davis’ “Freddie Freeloader,” for example — and cutting it up into sections, separate instruments, licks, phrases and then down to single notes. And then, like an instructor of Zen, Selvaggio moves his lesson up into a realm of spiritually, “focusing,” he said, “on that one note like meditation.”

For someone who studied under the former director of jazz studies, Chas Baker, more than two decades ago, Selvaggio’s education is refreshed come time for his own performance, whether it be in a quartet or quintet setting, he said.

Improvisation, the ultimate endgame for a “trained ear,” on baritone sax doesn’t mean blinders on center stage. If anything, the purpose of “selective listening,” he said, is to fulfill Ellington’s command, “to be open to every single sound around you” on stage. From garage rock to classical concertos, he said this practice is essential.

In his office, where 78 RPM records are stacked alphabetically under Miles Davis memorabilia, Selvaggio demonstrates his point using the upright piano across from his desk. Using his right hand, he plays a sustained Cmaj7 chord and sings the quick phrase “ba-da-boo-boo-boo-da,” mimicking the tone of a saxophone. He sits back down, almost out of breath.

“That’s what you have to be able to do,” he said. “Without thinking about it.”

Even in the non-classical and jazz spectrum of sound, selective listening can apply — from the finger-picking of a Sufjan Stevens banjo, to the crackling timbre of Sia’s high-flying vocals. Yet it’s not often applied, especially when you’re a student of Bach and Beethoven.

“Yes, I do listen to music for entertainment,” Raleigh Fagerhaug, sophomore music education major. “Yet I don’t sit down and listen to every cadence and every sixth interval. Only sometimes I do notice something I like and make note of it.”

Then there’s the overseen problem of having “good ears” — not being able to turn them off.

Selvaggio used a recent story, out to dinner with a friend, as example: A recognizable jazz standard comes on over the PA, and Selvaggio stops mid-meal. His mind is somewhere else. “Did you hear what he did?” he asks his friend about the trumpet player’s playing overhead.

“It’s actually difficult to casually listen to things for me,” he said. “You get so trained not to do it. And I have to force myself not to, and say, ‘I’m going to turn everything off and focus on the conversation in front of me.’”

As Selvaggio continues leading students, along with his Kent Jazz Ensemble, to “good ear” status, his own pursuit to perfection — even after 25 years of the performing — is still a far distance ahead, according to his John Coltrane “barometer.” He said he’ll still continue to surprise himself on stage with spontaneity — playing it by ear.