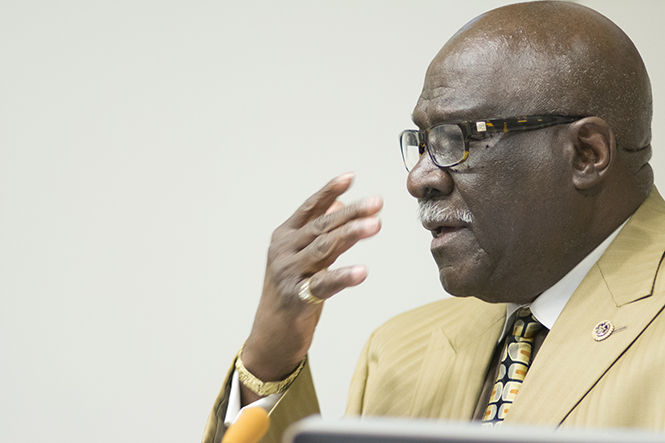 Clarence Bozeman told his audience about the “fly on the wall” conversations he had shared with King during the civil rights movement in the 1960s.

“Forgiveness is not always for the other fella,” Bozeman said.

Bozeman said he asked King why he was so forgiving of those who would potentially harm him.

He said that he took that quote to heart along with the many other wise words from the car rides he shared as he drove King around the South.

As an Alabama State University student, Bozeman’s dean chose him to be interviewed by King to drive him and his family every Sunday in the local church’s station wagon ­— the same station wagon used during the Montgomery Bus Boycott.

Bozeman said that King asked him numerous questions about his driving, major and plans after college and he said, “Am I going to preach or am I going to drive?”

He said that as he began to drive, his duties expanded.

Safety meant everything to King. He told Bozeman to not drive his wife and family after dark out of concern for their safety.

He said he also drove them to family engagements and was invited over to dinner with the Kings whenever his dining hall closed early.

Bozeman said King told him that he grew weary from the stress of the movement and the death threats he received from his enemies against his family and himself.

At one point, King felt that he was faltering and losing his courage, Bozeman said. But that when King prayed aloud, he had a spiritual experience to not give up on his civil rights efforts.

“Remember, God doesn’t seem to call the equipped, rather non-equipped,” Bozeman said. “Those are the ones that he calls.”

“I actually got chills at the end,” Abaray said. “I couldn’t believe it, getting that perspective from a ‘fly on the wall.’”

Deven White, a freshman middle childhood education major, said that it was pretty unimaginable to hear from Bozeman.

“It’s amazing how you can find somebody that was actually as close as he was,” he said.

White also said what he took away from the speech is to always forgive and to never quit.