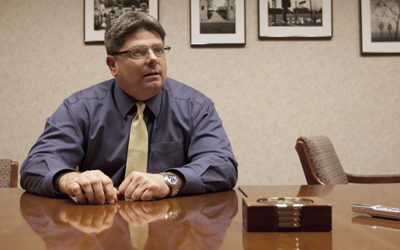 Vice Presidents Greg Jarvie and Gregg Floyd, who will retire at the end of this school year, plan to leave a lasting legacy as their time at Kent State ends.

Jarvie, vice president for Enrollment Management and Student Affairs, and Floyd, the senior vice president for Finance and Administration, announced their retirement on March 18 and plan to start the next chapter of their lives at the end of July.

Jarvie, a Kent State alumnus, has been at the university for 29 years since his time as a master’s student and in many different locations around campus. In his current position as a vice president, Jarvie said he has had the chance to work with many diverse students.

“What has excited me the most over the years is probably to see a student come in as a freshman and be able to watch them develop over four or five years into not only a good student, but a quality citizen and someone that is going to do very well,” Jarvie said.

Although he will miss working with people he has built great relationships with, he said he looks forward to spending time with his family.

“I knew it was time,” Jarvie said. “I thought the university was in a great spot with lots of great folks here that I work with, and transition would be easy so I’m ready to face the next chapter in my life.”

Jarvie said he also plans on finishing up a few things before he departs in late July including the change of bookstore and bank services on campus and closing Kent State for the summer. He also plans on helping the search and transition of his successor, he said.

Floyd will retire after eight years at Kent State and said he believes that his time here has been overwhelmingly pleasant and that he is leaving the university in a financially healthy state. He said he has worked with some incredible people as well, including current President Beverly Warren and former President Lester Lefton.

Floyd said he is looking forward to spending more time with his family in southern Indiana and being a grandpa to his 10 grandchildren. However, he said he finds it difficult to leave after all of the great relationships he has established.

“The time that I’ve spent here has been overwhelmingly pleasant by virtue of the people that I’ve been able to become aware of and consider friends,” Floyd said.

As for the future of Kent State vice president positions, President Beverly Warren said she is still working on the next step to replace Jarvie and Floyd in the coming year. The university will most likely appoint an interim vice president, she said.

“We are still working not only with the leadership team, but I’m going to meet with the Division of Student Affairs,” Warren said. “I want to ask for their input and how they think we should proceed.”

Jimmy Miller contributed reporting to this story. Contact him at [email protected]