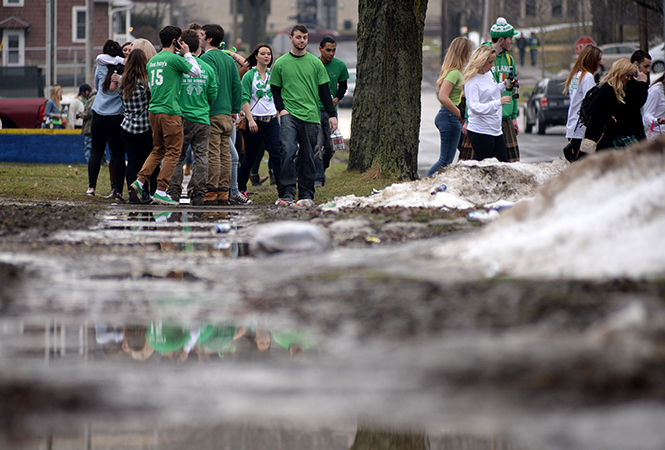 “I’ve been walking around N. Main St. and Sherman St.,” said Robert Popilock, a senior education major. “Down Sherman, there was a multitude of gentlemen attempting tricks on their longboards. Were they successful? No.”

St. Patrick’s Day, historically, is a cultural and religious celebration to commemorate Christianity coming to Ireland and St. Patrick. The day is celebrated with festivals where people wear green and shamrocks. For the sake of a proper celebration, the people of Kent State often go out the weekend before March 17.

Tory Rothgery, a senior business management major, had been out since 9:30 a.m.

“I saw a guy trying to get a plunger attached to his back,” Rothgery said, who saw fellow partiers suction a plunger to someone’s back.

However, Kent’s early celebration of St. Patrick’s Day wasn’t all fun in games. A few arrests took place on College Avenue in the result of a fight that erupted outside a duplex.

One person was arrested initially, while other people voiced their disapproval, which resulted in about one more arrest.

Those involved were not identified, but the Kent Police Department shut the party down on both sides of the duplex. An individual who did not wish to be identified disagreed with the police’s actions.

“You shouldn’t be reliable for everyone,” he said. “It’s very unfortunate; it’s not good for anyone.”