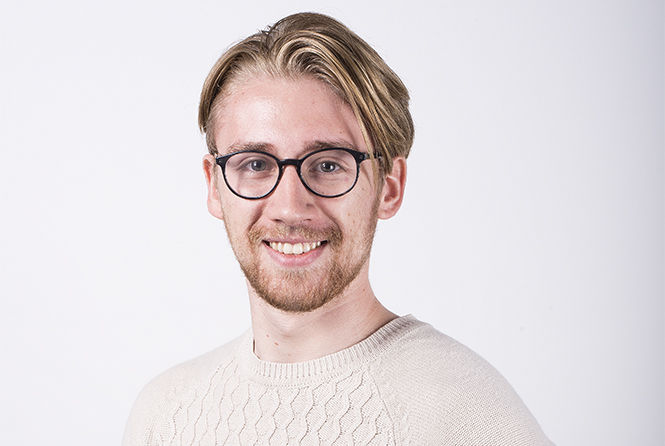 Every so often, something comes into your life. This something catches your undying attention, keeps you up thinking about how you’ll find this thing and make it yours. Lost nights of sleep, each day a distraction clouding your mind.

And you keep looking.

I’m a big Jimmy Fallon fan. Back in December 2012, I was on Late Night with Jimmy Fallon once when I was picked out of the line to be on a game show. I won $300 to Apple. Jimmy told me that I looked like Hermey, the elf from Rudolf the Red-Nosed Reindeer. I’ll never forget that day.

But outside of the brag, I just want his damn ice cream.

Searching all Giant Eagles within a reasonable radius, and sometimes unreasonable when it seems all but lost.

I trek quietly alone, believing I’ll never have that Ben & Jerry’s sweetness. That caramel and chocolate ice cream with the cookie swirls and chocolate chip and peanut butter cookie dough. The day may never come.

I have a better chance of finding a shirtless Vladimir Putin buying lunchmeat at the same Giant Eagle than finding this damn ice cream. He’s probably all about the honey-smoked ham if I had any guesses, but what would I actually know about what he likes to eat?

Where is Ol’ Vlad anyways?

He hasn’t been seen in public since March 5, with the rumors taking over since March 11 that something may be up with our friendly neighborhood Russian leader.

I like to imagine Vlad sending a faux email to the Kazakhstan government about “feeling ill,” much like I have (and I know I’m not alone here) to get out of attending class and the relatable events requiring attendance. Avoiding social media to prove you can’t even give the effort while laying in bed, even though you could be out frolicking, and if you’re Vlad, you’ll probably be shirtless and within a short distance from bear or a “replica” of a nuclear weapon in the shape of a ball with the word “nuclear” poorly written on it and with a poorly drawn Ukraine on a nearby tree. Oh, what joy one could have.

Sometimes you need a break, and maybe Vlad has taken this chance to seize it — because we all know he enjoys seizing things.

The saddest of search parties may be looking for him, and maybe they aren’t.

My Jimmy Fallon ice cream search party has what seems to be a slimmer chance of success than of finding Mr. Putin.

But we keep fighting to find what we love, what we want, what we need and maybe something we lost along the way.