Kent State Flips for a Cure 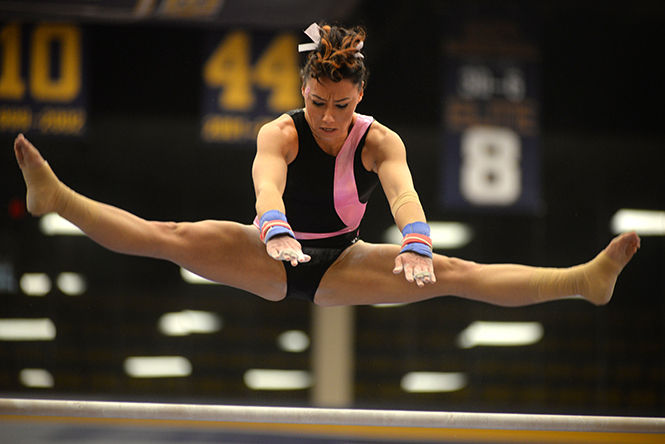 Kent State’s Rebecca Osmer warms up on the uneven bars during the Flip for the Cure meet against George Washington University on Sunday, Mar. 1, 2015. Osmer finished her routine with an overall score of 9.700 and the Flashes won 195.700-193.725.

The Kent State gymnastics team hosted its annual “Flip for the Cure” meet against George Washington University on Sunday. The Flashes defeated the Colonials 195.700-193.725 in the M.A.C. Center.

“Flip for the Cure” has been an event since 2008, uniting people on campus and the community to help women in the area defeat the deathly disease of breast cancer. Over the past six years, Kent State has raised over $25,000 to help organizations in their efforts to assist those suffering from breast cancer. The proceeds go to the COSA Comprehensive Breast Center.

There were t-shirts sold, a Pinkest fan competition, breast cancer survivor recognition and other various activities. Also, the Kent State’s Women’s Center attends “Flip for the Cure” every year in support of the event.

“It’s just something that we think is really important,” said Cassy Pegg-Kirby, assistant director of the Women’s Center. “Being here in support of our athletic program promoting this particular event, and it’s also wonderful being out here supporting our female athletic teams too.”

Pegg-Kirby came to the event with her husband and children.

“It has a little bit more meaning this year to me because of my husband’s recent diagnosis of cancer,” Pegg-Kirby said. “It’s not breast cancer, but it has multiple levels of meaning to be here and have this kind of support and outpouring of energy and effort to raise awareness, and to raise money for something that not only affects the person going through it, but can affect so many people that are a part of their lives as well. It really affects the entire community.”

Many people came out with friends and family to represent a loved one who has experienced this terrible disease.

“My brother and mother were recently diagnosed with cancer,” said Laura Masimore, a sophomore nursing major. They have two separate kinds. This event means a lot to me because of what I go through every day. I love that I could come out and show my support.”

Kent State gymnastics has come together to support the athletes that this event really hits home to.

“Breast Cancer is a big issue for us, and for our team,” said Craig Ballard, Kent State gymnastics assistant coach. “We’ve had girls on our team be affected by it, and their families. Obviously, we view gymnastics as a great sport for women. Breast cancer is really affecting a lot of women in our country, so if we can be a vocal part in the fight against it, then we’re going to do that. Our team gets really excited in doing all the things, whether it’s decorating the M.A.C. Center in pink or wearing the pink leotards. We really look forward to doing this because it’s our way to give back.”

The Flashes will host the Ball State Cardinals in the M.A.C. Center on Sunday March 8 at 2 p.m., as they honor the senior gymnasts.