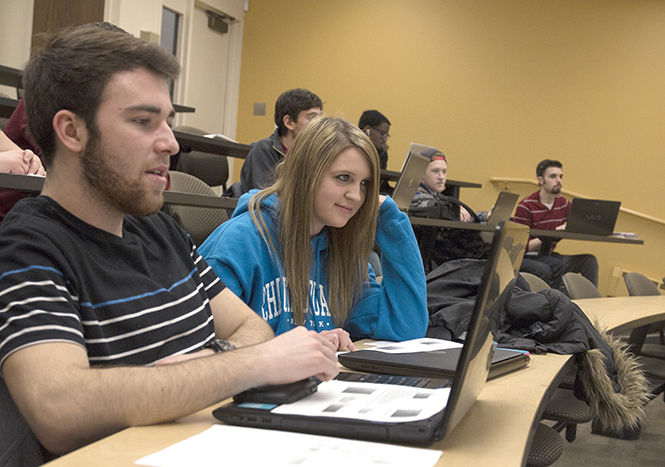 Erin Layne and Tia Coble, senior digital sciences majors, recently attended the Ohio Celebration of Women in Computing (OCWiC), a conference that focuses on encouraging and advancing women in computer science-related fields. After the event, Coble told Layne that she felt like she had forgotten how to hang out with other girls due to the lack of female presence in their major.

“I feel like I am losing a part of myself because I am not around females enough,” Coble said.

The overall female-male ratio is higher at Kent State; however, this is not the case in the university’s computer and digital sciences courses, Layne said. She recalled classes that were filled with 60 males and only two females.

“It’s true,” Layne said. “I’ve had that same problem. I mean I was never a girly girl growing up, but I mean I wear pink to class, and all the guys look at me like, ‘oh we forgot you’re not a boy.’”

Women held 26 percent of U.S. professional computing jobs in 2013, according to the National Center for Women & Information Technology. Twelve percent of 2012 computer science undergraduate degree recipients at major research universities were women. Eighteen percent of 2012 computer and information sciences undergraduate degree recipients were also women, according to the website.

“We’re happy to see that 24 percent of the digital sciences undergraduates are women, and we’re committed to further increasing that percentage,” Walker said. “That’s why events like the Ohio Celebration for Women in Computing are so important.”

Kent State was well represented at OCWiC with a group of about 13 digital sciences majors and several computer science majors from the Stark and Kent campuses, said Angela Guercio, associate professor of computer science who also attended the event. Along with Guercio, Walker and a few other Stark and Kent campus faculty members participated at the event.

The sixth biannual conference was Feb. 20 and 21 at the Lodge at Sawmill Creek Resort in Huron, Ohio. Two hundred women gathered from 29 colleges and universities throughout Ohio for OCWiC, Guercio said.

The statewide conference is modeled after the Grace Hopper Celebration of Women in Computing, a national gathering of females in the computing and technological industry presented by the Anita Borg Institute for Women and Technology, Guercio said.

Women of all ages engaged with one another through panel discussions, research presentations, workshops and keynote speakers. Female mentorship, computing career perspectives and programming were among some of the topics discussed during the panels, Guercio said.

“The idea of OCWiC and places like that is that we wanted to show that yes, we (females) aren’t that many, but nevertheless, there are lots and lots of other women who are like you,” Guercio said.

Guercio credits a lack of encouragement and the opportunity for young girls to become involved in computing with the field’s decreased levels of female involvement.

She believes that girls are not exposed to enough computer and technology-related curricula, such as programming classes, between kindergarten and grade twelve. As a result, younger women are often not as educated or interested about the computing field when they reach the undergraduate level.

The lack of female classmates also deters many women from remaining in computing majors. Many of Guercio’s female students have expressed feeling uncomfortable and out-of-place in the male-dominated classroom. They do not feel a sense of belonging, which is especially evident during group projects, she said.

“What I have observed as a teacher, in general as a professor, is yes lots of students tend to be a little intimidated by the fact that they kind of don’t have a connection sometimes,” Guercio said. “You know, the kind of bond of friendship and that type of connection that gets between girl classmates. They boost each other.”

Coble said the digital sciences major involves a lot of group work. She is typically the only female in her group and often feels singled out by male classmates.

“Any sexual comments, anything about women’s roles and things like that, it’s not that it’s personal, but I always feel it directed towards me,” Coble said. “Everybody always says ‘oh good job guys and Tia.’ It’s definitely separated. It’s not harsh, and I don’t think that people mean to, but it’s still very tense.”

Layne said that females are often stereotyped as qualitative and not quantitative thinkers. This misconception translates to the roles females are assigned during group projects. Males take the lead when it comes to programming and automatically leave writing and visual design to the females in the group, she said.

“Women have made a lot of strides because you don’t run into these stereotypes as much as you used to,” Layne said. “They’re still there sometimes, especially with the old-fashioned, but the younger the generation you’re working with, the less you run into it. We are making progress. It’s slow. It’s painful, but it’s there.”

Guercio said she believes it is important to let younger generation students see that several women balance work and family, while emerging as leaders in the computing field. Through mentorship programs, younger women can be inspired and realize that there is a female camaraderie present in the computing workforce.

“You have to find a mentor to guide you, lead you and encourage you every step along the way,” Coble said. “You know you don’t have to do it alone. No woman in the field ever has to do it alone, and I think that’s one of the benefits of being woman in this field because we can band together and see off of one another’s strengths and goals and inspire each other along the way.”