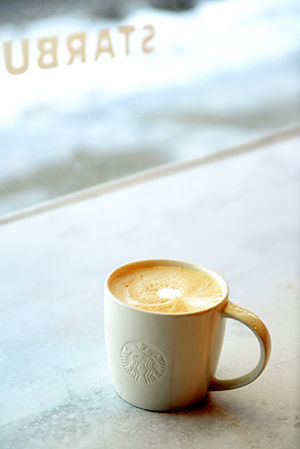 Starbuck’s new featured drink is a flat white coffee. The drink is steamed milk over a single or double shot of expresso.

One sip and a flat white coffee goes down smooth, numbing taste buds with two shots of espresso. The velvety texture of the steamed milk gives it a gentle feel, but it has a more intense flavor than a latte. The first taste is bitter, but a sweet undertone leaves a subtle hint of warmth. As a finishing touch, a delicate dot of latte art marks this drink as a force to be reckoned with.

Halfway between a latte and a cappuccino, the flat white gains its distinct qualities from pouring microfoam (steamed milk from the bottom of a pitcher) over espresso. It serves as an alternative for people who want a creamy coffee without the excess of a cappuccino.

Caitlin Elliott, a Starbucks barista and sophomore fashion design major, explained that flat white coffee is made with two ristretto shots, a short shot of espresso that gives it a stronger flavor.

“Unlike a normal latte, we use whole milk instead of 2 percent,” Elliott said. “It has a lighter foam that gives it the same texture throughout.”

There’s some contention over whether the frothy drink originated in New Zealand or Australia, Sydney. Australia claims to have created the flat white in the early 1980s, while others mark Melbourne as its birthplace in the 1970s. New Zealanders would disagree, claiming it as a Kiwi thing.

Once only available on trips to distant cosmopolitan streets, Starbucks brought the flat white to Canada and the U.S. on Jan. 6.

Part of the lure of the flat white may be the way the drink is presented. Flat white coffee is topped with a delicious form of creativity in “latte art,” which is formed by pouring steamed milk into a shot of espresso and leaving a design on the surface.

“Some baristas give it the signature Starbucks dot. I’ve seen people make hearts,” Elliott said. “Sometimes I get a little crazy and try to make a flower or a polar bear.”

Does the flat white really live up to the hype? It’s a small but fierce drink. With less foam, it packs more coffee in the same size cup.

The taste is bitter compared to a latte, but some might consider this a good thing because it isn’t watered down with milk. Latte lovers with a sweet tooth may be disappointed, but it’s the coffee talking, not the frills.

For those wishing to give it a try, flat white coffee is also served at Tree City Coffee and Scribbles in Downtown Kent.