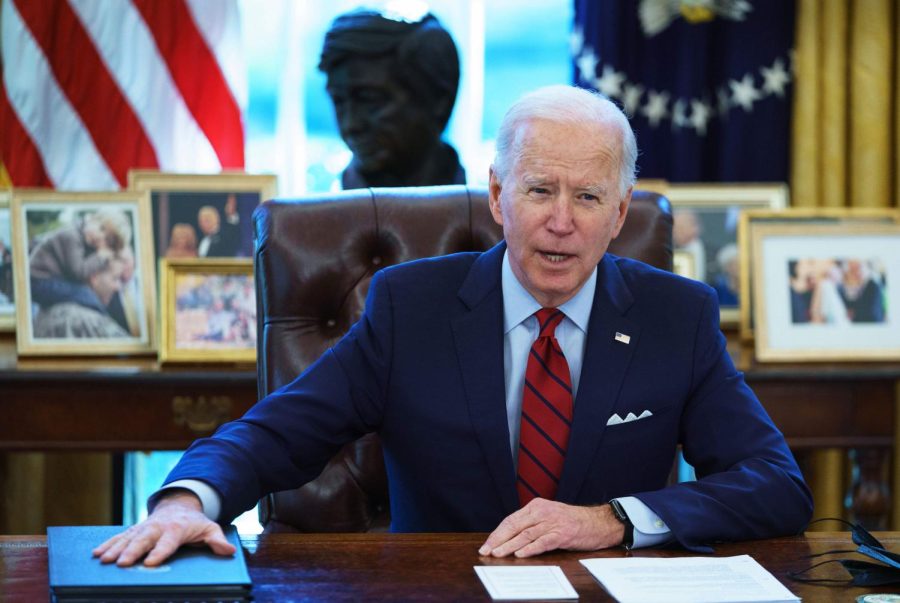 TOPSHOT - US President Joe Biden speaks before signing executive orders on health care, in the Oval Office of the White House in Washington, DC, on January 28, 2021. - The orders include reopening enrollment in the federal Affordable Care Act. (Photo by MANDEL NGAN / AFP) (Photo by MANDEL NGAN/AFP via Getty Images)

(CNN) — The Biden administration is engaged in an internal debate over whether to call the military takeover in Myanmar a coup, a designation that would have ramifications for US assistance to the country’s government, according to a State Department official and an administration official.

It is a decision the newly minted administration will have to make as it confronts one of its first major foreign-policy challenges.

President Joe Biden has indicated that sanctions could be on the table in response to the power grab by Myanmar’s armed forces. They seized control of the country Monday after detaining top government figures, including leader Aung San Suu Kyi. The takeover, which CNN is calling a coup, came after months of increasing friction between the civilian government and the powerful military, known as the Tatmadaw, over alleged election irregularities.

“The military’s seizure of power in Burma, the detention of Aung San Suu Kyi and other civilian officials, and the declaration of a national state of emergency are a direct assault on the country’s transition to democracy and the rule of law,” Biden said in a statement Monday. “For almost a decade, the people of Burma have been steadily working to establish elections, civilian governance, and the peaceful transfer of power. That progress should be respected.”

“The United States removed sanctions on Burma over the past decade based on progress toward democracy,” he continued, using another name for Myanmar. “The reversal of that progress will necessitate an immediate review of our sanction laws and authorities, followed by appropriate action.”

Biden’s statement followed earlier messages of condemnation from White House press secretary Jen Psaki and Secretary of State Antony Blinken, neither of which referred to the takeover as a coup.

“We will await the outcome before making an assessment,” the official said.

The US Agency for International Development said Monday evening that it is “carefully monitoring and assessing the potential impacts on USAID programs as this situation evolves.”

“The safety and security of our staff & partners are our top priority,” the agency said in a tweet.

Officially declaring the events in Myanmar a coup would legally bind the US to cut off foreign assistance to the country’s government. The State Department legal office is studying this determination and is likely to take the lead on this matter, the officials said. There is no legal requirement for the US to formally declare a military takeover to be a coup, but the administration will make that determination if it sees it in the US national security interest to do so.

Politico was first to report the debate is taking place.

Two congressional aides who were part of the State Department briefing said it appeared the department is going to weigh all of its options as it figures out its approach. They noted that unlike 10 years ago, there is now a US presence in the country to consider.

One of the aides noted that if a coup designation is made, the administration will have to determine how this will impact the implementing environment for humanitarian assistance. The other noted that while the US is generous with its aid to the nation, the US provides very little assistance directly to the government. A coup designation would not allow assistance directly to the Myanmar government to continue.

A third congressional aide, who expressed the need for the US to be guided by its own interests, noted that the law allows for carve-outs for funding related to global health and humanitarian needs, For example, last year the US government announced more than $18 million in Covid-19 assistance to Myanmar and that bucket of funding isn’t expected to be suspended, they said.

The first two congressional aides noted that if the administration does not impose sanctions, members of Congress will likely introduce legislation to impose mandatory sanctions.

One of those aides noted that “for us to get the right policy going forward, the administration and Congress will need to consult closely,” adding that it’s “important that they’re able to trust us and we’re able to trust them.”

Bipartisan lawmakers, including the top Democrats and Republicans on both committees, have expressed concern about the return to military rule.

A State Department spokesperson on Tuesday confirmed there was “a briefing for bipartisan staffers on recent events in Burma.”

An interagency National Security Council deputy committee meeting also convened Monday afternoon and officials were expected to discuss sanctions they could use to respond to the military takeover, two State Department officials said.

The Trump administration imposed sanctions against Myanmar’s armed forces commander in chief Min Aung Hlaing and blocked him from entering the United States for his role in human rights abuses against the Rohingya population in Myanmar’s Rakhine state.

The Biden administration could roll out sanctions as soon as this week, but its decision to pull the trigger will likely be impacted by a desire to move alongside allies. It is working to get a sense of how quickly other countries want to take action, the officials said.

In his statement Monday, Biden called on the international community to “come together in one voice to press the Burmese military to immediately relinquish the power they have seized, release the activists and officials they have detained, lift all telecommunications restrictions, and refrain from violence against civilians.”

“The United States is taking note of those who stand with the people of Burma in this difficult hour,” he said.

Asked if that was a message to China, which may seek to take advantage of the situation on the ground in Myanmar, Psaki said, “I think it’s a message to all countries in the region and countries who — you know, will be asked to respond or to consider what the appropriate response will be in reaction to the events that have happened over the past couple of days.”

Bonnie Glaser, a senior adviser for Asia and the director of the China Power Project at the Center for Strategic and International Studies, told CNN that imposing sanctions or limiting interactions with Myanmar could “open the door to even greater Chinese influence.”

However, the third congressional aide noted that “it is not clear that what has happened is seen by China as a positive development.”

Chinese Foreign Ministry spokesman Wang Wenbin said in a briefing Monday, “We have noticed what is happening in Myanmar and are learning more about the situation.”