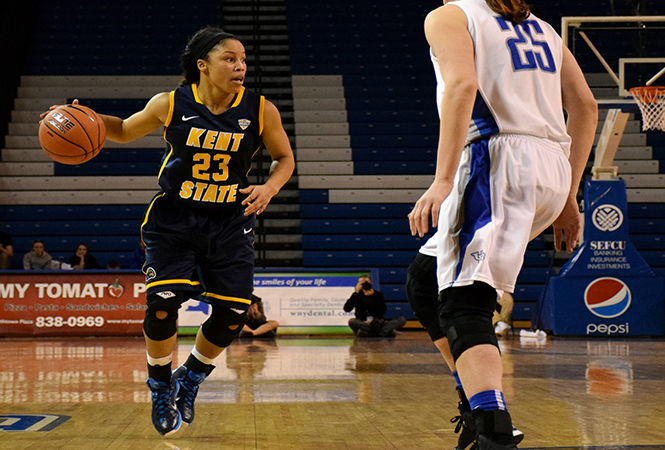 The Flashes (4-20, 2-11 MAC) entered the game carrying all of their momentum from their buzzer-beating win over Northern Illinois; however, they would not reach the same result, as the Flashes fell 59-57.

“I thought we did a nice job of making Buffalo adjust to us, from a defensive standpoint,” coach Danielle O’Banion said. “Our offensive execution was very good tonight. Their pressure forced us into some turnovers, which helped create some offense for them.”

Kent State opened the game on a 10-4 run. The team saw their lead grow as high as 14 points during the first half, as they shot 51 percent from the field and took a 33-24 lead into halftime.

In the second half, both teams went back and forth, trading shot-for-shot. The Flashes had a 49-48 lead at the 7:46 mark, but then lost the advantage on the next possession.

A free throw from sophomore guard Krista White tied the game up at 50 apiece, but on the next trip back down the court, Buffalo took the lead on a lay-up from Ayana Bradley, and from that point on, the Flashes were left playing behind for the rest of the game.

“In the second half, we didn’t control the boards very well, and they made a conscious effort to get to the free throw line, and that put us back on our heels,” O’Banion said.

The team spread the ball around Wednesday night. Of the team’s 22 made field goals, 19 were assisted. But once again, turnovers plagued the Flashes, as they turned the ball over 23 times, which led to 28 points for Buffalo.

“They left the light on for us, because they were missing free throws,” O’Banion said. “The difference down the stretch is they had five offensive rebounds from free throws, and that’s a cardinal sin in basketball.”

Despite the loss, the Flashes played well defensively. Buffalo came into the game averaging 19 turnovers per game, which is the worst in the conference, and Kent State forced 14 turnovers and held their opponent to shooting 36 percent from the field.

The Flashes will hit the road again Saturday when they travel to take on Bowling Green State University. Kent State beat BGSU earlier in the season, 55-48. Tip-off is set for 5 p.m.