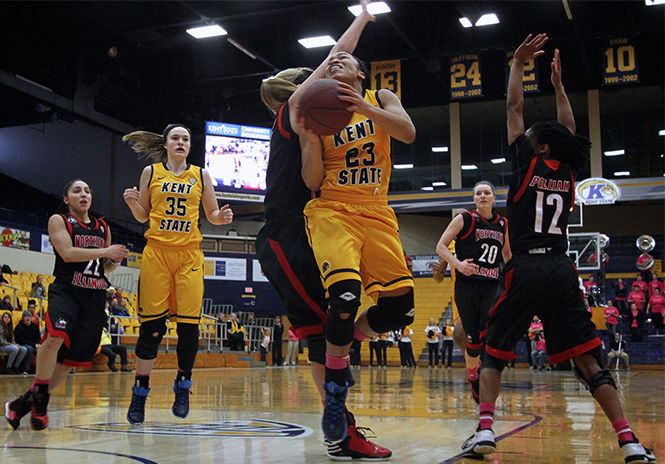 The Kent Stater Kent State Senior Mikell Chinn atempts to make a lay-up during the game against Northern Illinois University in the M.A.C.C Center on Saturday, Feb. 14th, 2015. The Flashes won 54-52.

After dropping its previous eight games, the Kent State women’s basketball team finally snapped its losing streak with a victory over Northern Illinois, 54-52.

With .08 seconds remaining in the ball game, sophomore guard Larissa Lurken threw an inbound alley-oop pass to redshirt junior guard Melanie Stubbs, who caught it mid-air and went up for the shot. The ball bounced on the back rim for a few moments, before eventually falling in for the game winner, and the entire M.A.C. Center erupted.

“We set up the play, and we just wanted to make sure we executed it,” Stubbs said. “Our nerves were running, but we had time to get our minds right since they took so long trying to get the clock right. I’m just glad we executed the play and got the shot to fall through.”

The Flashes (4-19, 2-10 Mid-American Conference) played a complete game. They led for a combined 27 minutes throughout the entire game and finished the game shooting 43 percent from the field.

“All game long we talked with our players about just staying in the present,” coach Danielle O’Banion said. “Obviously the last play of the game was exciting, but I thought our players did a great job of managing a couple of possessions at a time, and that’s something that we’re going to need to do moving forward.”

Offensively, Kent State owned both the paint and the glass all evening long. The Flashes out-rebounded their opponent 38-19, with 12 of them being on the offensive end, which helped lead to 17 second chance points for the Flashes. The team also dominated down low, scoring 24 points in the paint and registered 16 points from players coming off the bench.

Defensively, the Flashes forced their opponent into committing seven turnovers and held the Huskies to 37 percent shooting from the field.

O’Banion said it was the team’s execution that helped them earn this victory.

“I’m very excited for our players and proud of them that they found a way to get the job done today because sometimes you kind of lose a little bit of your ‘swagger’ and our team needed this win,” O’Banion said.

The Flashes will hit the road Wednesday when they travel to take on Buffalo at 7 p.m. Stubbs said she hopes the team can use this win as momentum heading forward.

“We just need to take this win and build from it, and hopefully try to get the next one,” Stubbs said. “We just have to go in practice tomorrow and work hard and keep getting ready for the next games.”