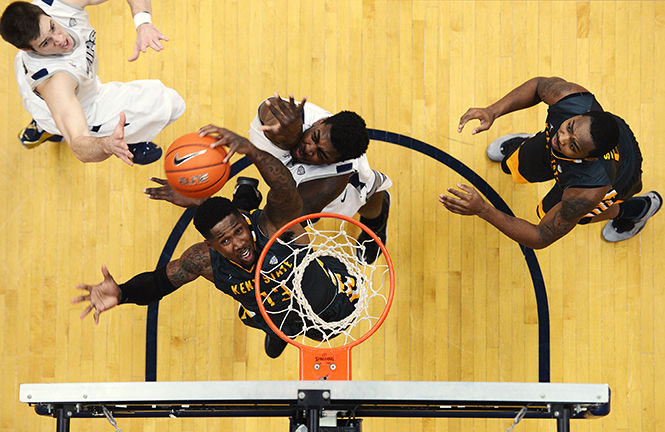 The Flashes committed 13 turnovers throughout the away game. and Coach Rob Senderoff was not pleased.

“We have to take care of the basketball better,” Senderoff said.

Senderoff was especially disappointed in his senior backcourt comprised of Kris Brewer and Derek Jackson. Combined, the two had seven turnovers and only two assists.

“We need those guys to play better if we are going to win in a tough environment,” Senderoff said.

For the Flashes, it seemed as though nothing could go their way, especially offensively.  The Flashes missed everything from a contested three-pointer to junior center Khaliq Spicer missing a dunk.

“That sort of took the wind out of our sail,” Senderoff said of the missed dunk. “That certainly was the back breaker.”

Senior guard Devareaux Manley led the Flashes with 20 points but shot three-for-13 from three. Junior forward Chris Ortiz was the only other player for Kent State to score in the double figures with 11 points.

The loss drops the Flashes to third in the MAC East conference standings behind Akron (8-3 MAC) and Bowling Green State University (8-3 MAC).

But Kent State can’t sit and dwell too long on the loss. Senderoff said that their focus must move on to Friday’s road game against the University of Toledo. Kent State beat the Rockets earlier in the season 67-60 at home.

“One game doesn’t make the season,” Senderoff said. “My hope is that next time we play them (Akron), it matters as much then as it does now in terms of the standings.”