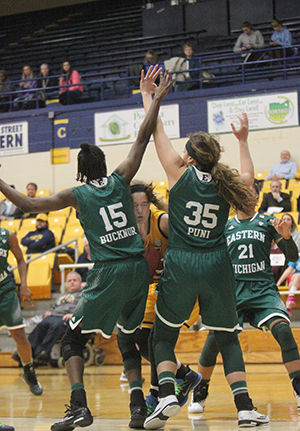 Kent State freshman forward Jordan Korinek is blocked by two Eastern Michigan University players in the M.A.C. Center on Feb. 4, 2015. The Flashes were defeated by the Eagles, 53-70, dropping their record to 3-17.

Things started out difficult for the team as they dug themselves into a 14-point deficit at halftime. The Flashes (3-17, 1-8 Mid-American Conference) scratched and clawed their way back into the game, before Eastern Michigan eventually put their foot on the pedal and ran away with it, 70-53.

“It was very frustrating to watch us in the first half because we did not do what we practiced,” coach Danielle O’Banion said.

During that first half, the team gave up 19 points off of 13 turnovers. Eastern Michigan came out in a 2-3 zone, which really threw the team off.

Even with the costly mistakes, the Flashes still shot well from the field, as they ended the half shooting 45 percent away.

In the second half, Kent State continued that same success, as they came out and scored three quick baskets and cut the lead down to nine points.

The Flashes would eventually cut the lead down to as low as seven points but were never able to get any closer. The Eagles went on a 9-2 run with 2:43 left in the game.

“It was a tale of two halves,” O’Banion said. “What’s frustrating about tonight’s outing is (that) if we would have taken better care of the basketball, then it’s a very different basketball game.”

The team was led in scoring by sophomore guard Larissa Lurken with 16 and redshirt junior guard Melanee Stubbs with 14. Senior center CiCi Shannon chipped in with nine points, while dominating the glass with 15 rebounds and swatting away four shots.  Tonight’s game was Shannon’s seventh consecutive game grabbing 10 or more rebounds.

“CiCi was very active. She had a hard time scoring the ball, but she continued to stay engaged in the game,” O’Banion said, “and she helped us on the glass, and that’s a sign of maturity which is a good thing.”

Kent State President Beverly Warren sat on the team’s bench Wednesday night, as she served as an honorary coach for the contest.

The Flashes will now prepare to travel to Athens, Ohio on Saturday when they take on the top-ranked team in the MAC conference, the Ohio Bobcats (17-3, 8-1 MAC). Tipoff is set for 7 p.m.