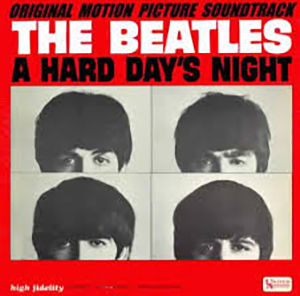 Last year, we celebrated the 50th anniversary of the Beatles coming to America with Northeast Ohio’s favorite Beatles tribute band, Hard Day’s Night, along with other Beatles-inspired acts to the Kent area for the first-ever Kent Beatlefest.

This year, Hard Day’s Night is jumping the gun, kicking off the Beatlemania month of February with a performance at The Kent Stage on Saturday, Feb. 7 at 8 p.m.

Kent Beatlefest is later this month on Friday, Feb. 20 at different venues around the city.

Playing “Paul,” Frank Muratore will hit the stage as one of the Beatles most beloved frontmen. Having seen McCartney twice in concert and even played alongside Beatles original drummer Pete Best in Liverpool, he’s perfected his “Paul” since starting the band in 1996.

“We always get a good crowd at The Kent Stage,” Muratore said.

The show will be in two sets: Beatlemania and Shea Stadium and then “Sgt. Pepper” and Studio years. The first half is early Beatles, matching suits, short hair with love songs for your enjoyment. The second half is the more psychedelic, heavier Beatles.

“We replicate the Beatles as they came over to America: correct guitars, correct suits, boots, hair — everything,” Muratore said.

You’ll see the band in the replica black Chesterfield suits like the Beatles wore on the Ed Sullivan show to their popular “Hard Day’s Night” film.

“They didn’t think the quality was good, didn’t like the environment and couldn’t control the sound,” Muratore said. “The band became more of a studio group after Shea.”

As the band changes into their “Shea jackets,” they recreate the live show, minus the 50,000+ screaming fans and outdoor staging.

Songs include “Eight Days a Week,” “Help!,” “You’ve Got to Hide Your Love Away,” “Yesterday,” “Paperback Writer” and more.

“As I perform ‘Yesterday’ as a solo, the other guys will change into their next outfit,” Muratore said.

The “Sgt. Pepper “era was about bold, vibrant colors, which is seen by the famous “Sgt. Pepper” uniforms worn by the Beatles. This is a time when psychedelia hit the Beatles. George Harrison had learned the sitar under construction from Ravi Shankar, and it was a new sound for the band.

Hard Day’s Night will wear their replicated jackets and perform songs such as “Sgt. Pepper’s Lonely Hearts Club Band,” “Lucy In The Sky with Diamonds,” “Magical Mystery Tour” and more.

Now, the band will put on longer wigs with more casual clothing, setting the vibe of later Beatles; no one will be wearing matching suits anymore. This is a time when the Beatles were coming to an end, barely pushing out albums and then eventually breaking up.

Muratore said an encore of “Get Back” and “The End” will be played — two of the greatest late-Beatles songs.