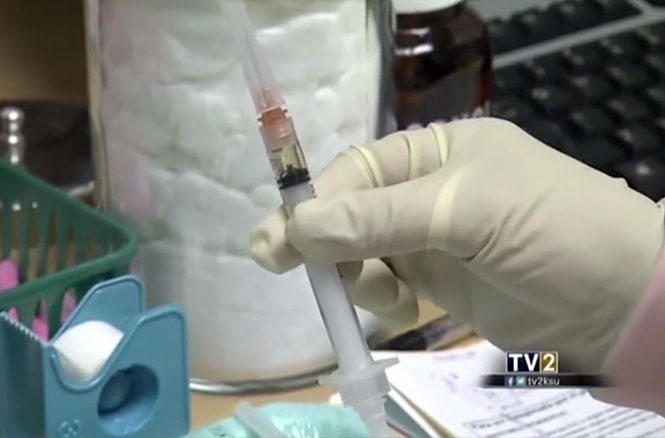 Screenshot from TV2 video on Vimeo. “Should you vaccinate your child?”

Measles, the highly contagious virus, has taken over headlines nationwide and is even being debated among members of Congress.

It’s mandatory for all Kent State students to have the measles vaccination; however, not all students have gotten their shots, which can lead to consequences from the university.

Kent State students are required to have two doses of the MMR vaccine. Those doses should have been at age 1 and again during kindergarten, usually ages 4 to 6. MMR requirements apply to all students, even international students.

Facts about Measles According to the Center for Disease Control about three out of 10 people who contract measles will develop one or more complications including pneumonia, ear infections and diarrhea. The CDC reports that from Jan. 1 through Feb. 6, 121 people from 17 states were reported to have measles. For people who only receive one dose of the measles vaccine it’s about 93% effective if they’ve been exposed to the virus. For someone who receives both doses of the vaccine it’s about 97% effective. According to a CDC data analysis from 2012, 91% of children ages 19-35 months are vaccinated against measles, mumps, and rubella. 91.4% of adolescent’s ages 13-17 years are vaccinated.

Deregistering rarely happens because most students comply with university policy.

The state of Ohio requires students to disclose whether or not they’ve had certain shots, such as the hepatitis B and the meningitis shots.

“The state doesn’t require any shots for college (students); that is up to the college,” DeJulius said.

Ryan O’Connor, senior Spanish translation major, was vaccinated when he was younger.

“(I have) no concerns about contracting the virus,” O’Connor said.

Kara Cleckner, sophomore public relations major, also had the vaccination when she was a child.

“Since I had the vaccination, I’m not really worried about measles,” Cleckner said.

Some politicians are mandating the vaccination be administered to children across the country, whereas others think it should be the parents’ decision. According to the Center for Disease Control and Prevention, the measles virus is often brought into the United States by travelers or people from other countries.

DeJulius said for people who are traveling, it’s especially important to get the vaccination.

Measles was eliminated in this country in 2000 with the creation of the vaccination, according to the CDC. However, some parents now do not want to or are refusing to vaccinate their children due to reasons ranging from religious or philosophical.

Each measles case could cause an outbreak, especially if people in an area are under-vaccinated and exposed.

According to the Portage County Health Department (PCHD), there have been no reported cases of measles in 2015 to date for the county.

“The Portage County Health Department provides MMR vaccinations to all children,” said Becky Lehman, director of health education and promotion for the PCHD. “The PCHD provides education to parents concerning all vaccine-preventable diseases and the required and recommended child vaccine guidelines.”

The virus is spread through the air by coughing and sneezing.

Symptoms include fever, runny nose and telltale rash all over the body, according to an Associated Press article posted on the Sacramento CBS-affiliate KOVR’s website.

The reason measles is so serious is because it can progress to ear infections, pneumonia and can even be fatal.

Students living on campus who develop symptoms need to be seen by a physician immediately, and students who may not have gotten the vaccine as a child can go to the DeWeese Health Center where the vaccine is available.

Should you vaccinate your child? from KentWired.com on Vimeo.