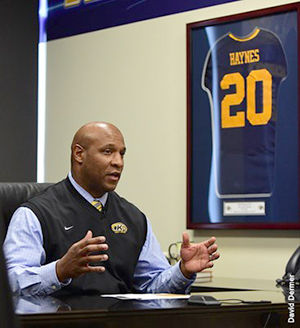 Now with three recruiting classes to his credit, Haynes said this upcoming 2015 season has already emitted a much more positive vibe than the previous two.

Although Haynes admitted his coaching style isn’t too dissimilar from former Kent State coach Darrell Hazell’s, this is the first time Haynes is dealing with the majority of his own recruits.

The long, three-year transition to the head coaching position is complete.

“This is the first time I feel like I’m head of this program three years later,” Haynes said. “It just takes time to get the philosophy, culture, the whole thing of the program.”

“Recruiting is a group effort, and we get the kids that really fit into our program and also that fit into Kent State University,” Haynes said. “We feel that we filled the needs that we have to fill, really with a lot of depth. We will continue to recruit O.K.G. – our kind of guys – really academically motivated, tough leaders. Those are our kind of guys, which we will always get.”

Kent State signed a total of 23 players since summer, three of which joined the team midway through the 2014 season.

“We reached out (to 10 states) this year, three of them were state champions, eight of them were first-team All-State, 15 of them were captains on their team, so those characteristics that we’re looking for in guys, this class definitely fit, and then academically they were a 3.0 GPA average football team and also a 20 on the ACT,” Haynes said.

Two of the team’s top out-of-state recruits, linebacker Jim Jones and running back P.J. Simmons, were teammates at Godby High School in Tallahassee, Florida. Haynes said he didn’t think he would be able to sway them, but staff connections drove the strategy to pick up more out-of-state recruits.

“When you look at your staff, you try to go to the areas where the staff maybe has strengths there,” Haynes said. “You figure where the staff has recruited and has major ties at, and you just go put a hook out there and see if you could get the guys, and this is one of those years where we could definitely do it.”

Haynes said this year’s class is a young, talented group of high school athletes that have the potential to make an immediate impact on the team this season. Once they’re integrated into their new system, Haynes expects everyone to play.

Long gone are the days of redshirting.

“This day and age in recruiting, the redshirting idea is kind of over,” Haynes said. “We expect everyone to…have an opportunity to come in and play.”

Taking a more high school football approach to this upcoming season, Haynes hopes some of these new recruits will be able to play both ways.

“Offense and defense, especially wide receivers, defensive backs, can go either way,” Haynes said. “As long as (these recruits) are good athletes and are tough, there are multiple things that you can with those guys.”

Haynes placed emphasis on the word “athlete,” stressing that he and his staff adopted a new philosophy of recruiting the best “athletes” before the best football players.

“I think you have to start with athleticism in everything that you do in college football,” George said. “The first physical attribute that you’re looking for is athleticism, being able to run, bend your knees, change direction. Those are all top priorities.”

On the defensive side of the ball, Kent State welcomes 12 newcomers, 10 of which signed Wednesday and two of which were early enrollees.

“Of those defensive linemen, there is really one true defensive tackle, another guy, Alex Hoag, who is a defensive end, defensive tackle and then we also signed a couple of LEOs who we feel like can play our slash position between the defensive end and linebackers,” George said. “The LEO position that we recruit is really a combination of a linebacker and defensive end. A lot of times that’s going to play on the line of scrimmage but also has the ability to drop into coverage at times.”

George also recruited a pair of true linebackers, or “guys that can play in space.”

“Those guys are going to have to be matched up to slot receivers at times and be able to handle that guy underneath,” George said.

The defense also brings in five defensive backs in the hope of aiding a weak secondary that took a lot of hits last season.

“We wanted to add depth at every position,” George said. “There was an emphasis to bring in defensive backs in this class because of what we needed in terms of our numbers.”

As far as determining who will get playing time next season, George said it’s all a matter of transforming standout high school players into productive, contributing members of a college football team.

“All the guys that come in here to play at this level were great high school players,” George said. “We need to find guys that once they get here, are going to have a little bit of a chip on their shoulder and have the motivation and desire to improve. Those are the guys that have success at this level.”

Offensive coordinator Don Treadwell recruited 11 signees to his offensive unit, including four offensive linemen, one tight end, two wide receivers, a couple of running backs, a quarterback and “an athlete who can play a number of positions on offense.”

Treadwell said he evaluated and sought offensive players who displayed a certain level of versatility and can play multiple positions on the field.

“Coach Haynes helps us identify athletes in the big picture, so when it comes to skill positions, we’re not necessarily looking for a guy who only plays (that position),” Treadwell said. “

Treadwell also said four new linemen will help fortify the O-line and bring with them a wealth of experience.

“Coach (Antoine) Sharp likes when they come in already chiseled and have a little bit to them, especially at a position like that,” Treadwell said.

Behind the offensive line, the Flashes signed one lone quarterback from Cleveland who will add depth to a marquee, yet still ambiguous position held by three different players at one point this past season.

Mylik Mitchell, a four-year starter at John Hay High School, guided his team to a conference title in 2012 and led the Hornets to regional playoff appearances in 2012 and 2013.

“He came to our camp this summer, so we’ve had him ever since June, and he’s always been high on our board,” Haynes said.

Treadwell said he’s not sure kind of quarterback Mitchell will be, although he expects him to show a certain level of versatility as a potential dual threat quarterback.

“We like to have a variety of things that we’re able to do offensively, and we think Mylik is athletic enough to do all of those things for us and not limit him to a pocket, pass-type quarterback,” Treadwell said.

Neither Treadwell nor George mentioned specifics beyond brief mentions of a few guys, as it’s to early too tell who the key movers and shakers will be yet.

“It’s hard to just pinpoint one guy because they all bring a lot of special things to the table,” Treadwell said.

One area in which the Flashes faced limitations this past season was at running back position.

Haynes said the addition of Simmons, Myles Washington and Will Mathews out of Louisiana will provide the running corps with speed it didn’t possess in 2014. The Flashes only rushed for 901 yards as a team, so Haynes hopes newfound velocity will add depth and flexibility to a position that’s been shaky ever since the departure of former tailback Dri Archer.

“You look at P.J. (Simmons), you look at Antwan Dixon, the two running backs we signed, you talk about speed,” Haynes said. “That’s the name of this game today is speed. That’s what we needed to upgrade, and that’s what we did what those type guys.”

Simmons and Dixon were not easy pickups, but two kids Haynes always had at the top of his board.

“It just took some time and just a relentless effort by coach (Doc Gamble) at just going down there every week and sticking with it…so just a good job by him selling us,” Haynes said.