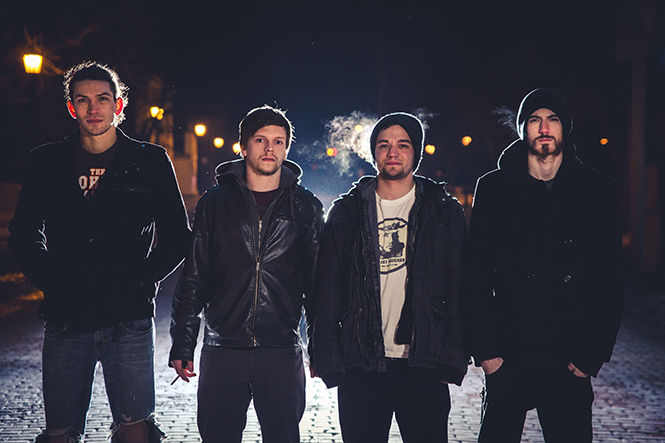 Take Bruce Springsteen and Layne Staley, the lead singer from Alice in Chains, mesh them together, and out comes gritty rock band Harmonic Minors.

Or so they claim.

“I guess it’s almost blasphemous to compare your band to Bruce Springsteen,” Joe Czekaj, drummer for the Minors, said. “But still, ‘Thunder Road’ is huge for us.”

Beginning the new year with a fresh lineup — adding Czekaj on drums — Kent’s Harmonic Minors are excited to spread their solidified sound they recorded on their first EP last August. They are also set to play The Empire Concert Club & Bar this Friday, Feb. 13, after a month-long gig hiatus. With their play-all attitude, the Minors have gradually been spreading their thick-to-cut, Marshall-stack sound as they find themselves a narrower genre.

Chad Lundgren, the Minors’s down-to-earth lead singer and guitarist, said that the goal of the group is actually a lot simpler.

“Honestly, we just want to rock out,” he said.

Lundgren and James “Jesse” Ebel formed the Harmonic Minors in January 2014 with a limited vision of what exactly it entitled. Lundgren, who was coming from hardcore group Abandon All Hope, knew that aggressive-type metal wasn’t on the agenda for the Minors, and Ebel eventually came to agree.

Once Lundgren heard a demo tape Ebel had stashed away from 2013, the two knew they had a sound to work off of. Bassist Lincoln Hart, along with former Minors’ bassist Nathan Borukhovsky, were brought in soon afterwards, and “things just came together like that,” Lundgren said.

The Harmonic Minors EP, worked on from then until its August completion, shows the dual-personality of the Minors as one-part alt romp, another part piano-fueled heartache.

One finds somewhere along the way the spirit of Eddie Vedder, along with what was a “long and arduous” process for Lundgren was, at some points, a clash with Ebel for what the Minors stood for.

Come the production of the title track, however, its vocalist said, was where the group’s identity was rightfully found.

The most representative track, “Molly Blues,” gives us Lundgren up against the grain, with Les Paul leads and group shouts that stem from past hardcore influence.

Semi-ballads “Still Going To War” and “Dark Days” show off Ebel’s melodic tenor, paired with the sound of a vibrant grand piano.

For a boogie throwback, the Minors give us the tellingly titled “Move On,” complete with falsetto call-and-response vocals, proving that the boys have room for a roots homage.

Especially for Hart, groups that have composed past and present Kent scenes have made their imprint on the Minors. Punk groups like Starcrossed and Party of Helicopters make their way, along with blues veterans Ian Penter and the Numbers Band.

Any “radio-friendly” influence the Minors owe is to their producer Johnny Burke — hand claps in post-production included. As Lundren makes it clear: The Minors are a “modern badass rock band,” putting emphasis on the “modern.”

When “Yes Man” Czekaj replaced Hart on drums — with Borukovsky making a move to Columbus — marked an end of an era for the Minors and the start of a new one. Without the agenda of “pushing boundaries,” the group puts “having fun” in their category of highest priorities in the near future. Any ambition lies mostly, Lundgren says, in the frequency of upcoming shows.

“Yet I still think that we’re trying to develop the band that we’re going to be,” he said. “Meaning that we’re just going to keep on saying ‘yes’ to whatever comes up.”

Two-month long member Czekaj agreed, his shirt reading, ‘It’s all about the beat.’

“My attitude is ‘What’s the worst that could happen?’” he said. “I smile about it because our options are endless.”