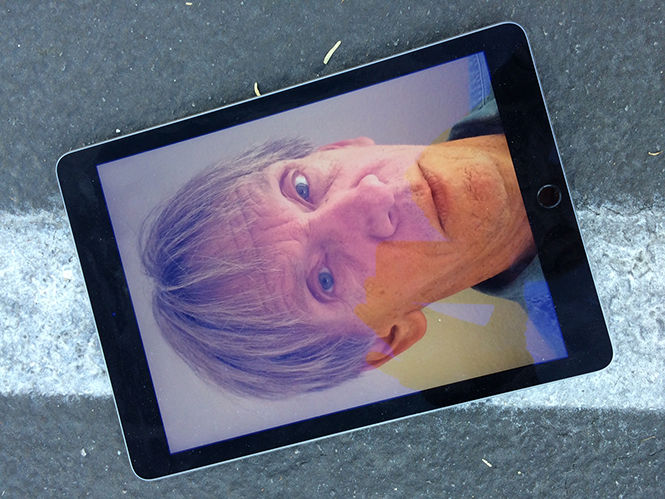 Kent State alumnus Kim Uhlik has worn many hats. From earning his master’s degree in geography from Kent State and working as a cartographer, to being a musician, to returning to school to earn his doctorate in higher education administration and then working as a tennis coach and professor, Uhlik has held several diverse careers and passions.

But over the years, a black and white photography class he took at Kent State stuck with him. There he learned the basics. There he developed his craft.

As he traveled around the world, Uhlik, who often walks or rides his Razor scooter, was struck by everything people were missing because they were engrossed in their electronic devices. Inspired by these items — sometimes unusual, sometimes familiar — Uhlik began photographing them with his own devices, using brick, concrete, asphalt and sand as his canvas.

The Kent Stater met with Uhlik to discuss his photography and S/He Who Looks Down: An Exhibition of Digital Images, his exhibit at the Kent State School of Art Galleries, Downtown Gallery.

KS: How did you go from where you began with doing your master’s degree to being musician to being a photographer?

KU: “I have sort of a life philosophy (which) is to turn your avocations into vocations. So in other words, get paid for what you love, and as I developed one career and sort of took it through its career arc, and then, got a little bit bored and said, ‘well what can I do now?’”

KS: For someone who hasn’t seen your work, how would you describe your photography style?

KU: “I think it’s very unique. … People very seldom look down. And mostly because we’re driving, we’re in vehicles and so we’re not really paying attention to what’s below us. … There’s a whole world down there. All these artifacts. They’re not often junk; they’re things people have lost, have dropped. And as you’re walking, just serendipitously, you come across it. I don’t go out with my digital devices and go to parking lots and stuff and look for stuff that’s fallen out. These are things that I encounter. I get out of the car and look down, and then, there’s this unusual placement of — maybe sometimes it’s a common object —but it’s like, “What is it doing there?”

“So the canvas would be asphalt, concrete, grass, you know wherever the object fell, sand. And then there’s also a recurring theme. For some reason, I’m finding little stars all over the place.  Beaches, sidewalks, parking lots, bank floors, a men’s restroom floor — these little decorative stars, and it’s like, “Why would a star be sitting here?” So it’s sort of that — it gets a whole intellectual process going. You know, why is this here? Who lost it? Will they come back? It’s very transitory, too, because someone would come back and look for it and find it, we hope, because I don’t pick up what I find. I just leave it where it is, or trash people come by and pick it up. So, what I have seen will not be there maybe even a day later.”

KS: What was it that made you decide to make an exhibit out of those photos?

KU: “The underlying theme of people don’t pay attention when they walk, and they’re looking down, they’re looking at their devices, and they’re missing all of this stuff. It’s filling an intellectual void. In other words, people are being very superficial on their devices. I mean obviously sometimes there’s an important conversation going on, but a lot of the Twitter feed and all of that, it’s very superficial. It has no lasting value. And you don’t really question it. It doesn’t make you a better person, and it doesn’t make you think more deeply. So, I think this presentation of all these unusual situations may get people to think, ‘Wow.’”

KS: Did you learn anything while gathering photos for the exhibit?

KU: “Well I don’t want to sound self-absorbed or anything, but I thought these are really crisp images, so I really enjoyed the quality of them from the technical point.  But also a sense of sort of amazement still that this object was there, and I would just sort of start to think again, you know, go through that whole process of processing the image and what it meant.”

KS: How do you hope people react to your work?

KU: “I believe art should change the world and should change behavior at least in a small way. What I hope people will do is start looking down more, actually looking and being in the moment, and then, they’ll start noticing all of this stuff. … I also hope that intellectually people will begin to look at objects in a different way. Saying why is this here? Who put this here? Are they coming back for it? Do they miss it? Was it a throwaway or was it actually lost and people will be upset?”

Uhlik’s exhibit of 25 photographs will be on display at the Kent State School of Art Galleries, Downtown Gallery at 141 E. Main St. through April 4.